The ability to speak more than one language is one of the more notable strengths of the Swiss people and economy. It also makes Switzerland a good test case for how the world might benefit from more multilingualism in economics and trade, argues Gabrielle Hogan-Brun, a language expert who is Swiss and has taught at universities in Lithuania, Switzerland, the United Kingdom and United States.

We Swiss are known for our multilingualism. In the marketplace, this hallmark is our unique selling point. It is one of the cornerstones of ‘Swiss made’. The market benefits of multilingualism seem evident. So, would the global economy be better off if everyone embraced multilingualism? Or would a move towards one global language make more economic sense? What are the costs and benefits of this language choice?

At the moment, we have ample hard evidence from both sides of the Atlantic that language-skill shortages in the workforce can harm the economy. Recent surveys have shown that one-in-four UK and one-in-six US businesses are losing out due to lack of language skills and cultural awareness among their personnel. By contrast, Swiss research suggests that a multilingual approach can yield unique business benefits. In fact, the economic value of multilingualism to Switzerland has been estimated to be 9% of its gross domestic product. So, multilingualism can be considered a source of considerable wealth for the country. In particular, its value to IT services has been calculated to be nearly 25% and its value to the chemical, transport and mechanical engineering industries to be over 15% each.

But which languages should we learn if we wish to optimise our return on investment? English is clearly popular, is often favoured in schools and is expected in many types of employment nowadays. Interestingly, Swiss studies point to regional preferences for second language skills. Higher wage differentials were indeed noted everywhere in Switzerland for proficiency in English, but more so in the Swiss-German region than in the French- or Italian-speaking parts. In other words, knowledge of English has greater market value for someone in Zurich as does mastery of German in Geneva or Lugano. This shows how economic incentives variously drive particular occupational language choices.

Yet you (like me) may have become immersed in another language primarily for cultural and emotional reasons, deriving economic benefits later. Indeed, we are in good company. Take Facebook’s founder Mark Zuckerberg. Why is he learning Mandarin? His wife Priscilla is Chinese, but he also has a market-driven incentive. Knowledge of Mandarin may help him attract a billion additional Facebook users as his company tries to penetrate China’s market. In this, he follows an old mantra that was famously expressed by Willy Brandt, a former Chancellor of Germany: “If I’m selling to you, I speak your language. But if I am buying, ‘dann müssen Sie Deutsch sprechen’ (then you must speak German). Similarly, German proficiency helped Egyptian entrepreneur Samih Sawiris to build trust and a good rapport with local authorities to win their approval for his alpine resort in Andermatt. These examples make a strong economic case for promotion of multi-language and cultural ‘soft’ skills.

Notwithstanding its potential to generate market benefits, the management of societal multilingualism also entails costs. In Switzerland, an estimated one tenth of the resident population does not consider one of the national languages to be their main one. Instead, they may be speakers of Croatian, Albanian, Portuguese or Spanish. Some level of language support may help them in employment, for access to social services, for education. This social dimension of multilingualism forms part of the payoff when cost-benefit calculations are used in decision-making about language provision.

Switzerland is an excellent test case to study interconnections between multilingualism and economics. It may serve as an example as countries and organisations around the globe rethink the language-related costs and benefits for trade in a rapidly changing global arena.

The views expressed in this article are solely those of the author, and do not necessarily reflect those of swissinfo.ch.

Multilingualism How many Swiss regularly use at least four languages?

Whether chatting with family, friends or work colleagues or just watching television or surfing the internet, almost two-thirds (64%) of Swiss use ...

If you only speak one language, and you happen to live in a multilingual country like Canada or Switzerland, Graham Fraser is the guy to have on ...

Having another language can aid your brain. Not having one can hurt your promotion chances.

How much? Pressure to harmonise language teaching at school

The government is calling for increased efforts to streamline the teaching of national languages in Swiss schools. It presented plans in a bid to ...

Language exchange The Swiss school as a multilingual playground

While the debate on language learning continues to provoke strong reactions in Switzerland, linguistic exchanges are on the rise, although not as ...

The language debate is reaching new heights in Switzerland with French and Italian speakers uneasy about the progressive abandonment of their ... 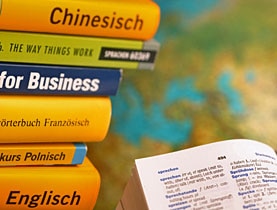 Switzerland's multilingual heritage gives it a competitive advantage worth SFr46 billion ($38.15 billion), says a study presented in Bern this week.