The writer, reporter and photographer Annemarie Schwarzenbach lived her life to the fullest, becoming a cultural icon. On the 75th anniversary of her tragic death, more than 3,000 pictures are being made available to the public. (SRF, swissinfo.ch)

Schwarzenbach was born in Zurich on the 23rd May 1908 into a wealthy family of Swiss silk producers. As the third of five children, she decided to become a writer at the age of 17, and studied history in Paris and Zurich where she graduated from school in 1931. In 1933, she started to work as a journalist and photographer for Swiss magazines and newspapers for almost 10 years, travelling around the world.

Following a bicycle accident, she died on November 15, 1942 at the age of 34. The writer and reporter achieved early fame during her lifetime, but it was not until the end of the 1980s that her work was rediscovered.

The Swiss National Libraryexternal link has now made available online more than 3000 of her photographsexternal link taken during her travels between the 1930s and 1940s in Europe, Africa, America and Asia. An interactive map of Schwarzenbach’s travels can be found hereexternal link.

On International Women’s Day, we asked our readers which Swiss women – past or present – they find most inspiring. Here are the results.

Rediscovering the life and works of the troubled Swiss writer Annemarie Schwarzenbach. An exhibition dedicated to Schwarzenbach (1908-1942) is ...

An exhibition of pictures by Swiss photographer, Annemarie Schwarzenbach, has opened at the Swiss Institute of Contemporary Art in New York. ... 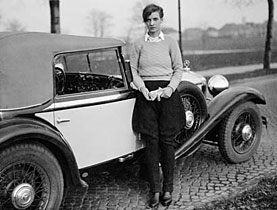 Enigmatic Swiss writer Annemarie Schwarzenbach was beautiful and talented. She lived life to the full – but she died tragically young at the age ...