A clear majority of Swiss are in favour of raising the retirement age of women from 64 to 65, as well as a tax-hike to make pension reform possible, according to a poll published Sunday.

The survey found that two-thirds of respondents are "in favour" or "fairly in favour" of a higher retirement age for women, as the Swiss government has recently proposed.

SonntagsBlickexternal link, which published the findings, noted the Federal Council's pension reform plans, which would be funded through a tax increase, are viewed more favorably by Swiss citizens than political parties.

Men clearly support the measure to raise the retirement age for women (78%), according to the survey. Women were more evenly split, with only 54% expressing a favourable view on the issue.

Almost two-thirds of the respondents appeared willing to accept a 1.9 increase in valued-added tax (VAT) to fund pension reform, with 23% saying they were "in favour", and 41% others leaning in that direction.

A fifth of respondents said they were outright "against" a tax adjustment, while another 13% fell in the " fairly opposed” camp.

The representative survey was carried out by the GfS Bern instituteexternal link between May 25 and June 11, drawing no the feedback of 1336 citizens with voting rights from across Switzerland.

The findings suggest a shift in perspective among the Swiss population. An increase in the retirement age for women was considered one of the main reasons for the rejection of the September 2017 pension reform plan for 2020 put forward by Federal Councillor Alain Berset.

In March, the government presented the outlines of a new state pension reform plan, including raising VAT by 1.7% to fund it, and raising the retirement age for women to 65.

Six people out of ten (58%) stop working before the official retirement age in Switzerland, reports the NZZ am Sonntag newspaper.

Swiss President Alain Berset has defended his proposed pension reform plans, which include a 1.7% increase in valued-added tax (VAT) to fund it.

The number of doctors is increasing in Switzerland. Although men remain in the majority, the proportion of female doctors is up. 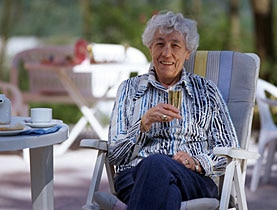 Heidi looks back on a life less ordinary

One of Switzerland's best-loved exports, the little mountain girl Heidi, was a cult figure in her younger years but she disappeared from public ...

A lobby group representing the interests of older workers has launched an initiative to reform the occupational pension system.

The Swiss government on Friday fixed the outlines of a new state pension reform plan, including raising the retirement age for women from 64 to 65.