Serbia’s last circus bear recently left his temporary home for the biggest adventure of his life: a 1,400km trip to Switzerland.

Napa the bear will become the first resident of the Arosa Bear conservation centre (Arosa Bärenlandexternal link) in the eastern canton of Graubünden.

In 2016, officials rescued the brown bear from a cage in a circus ground, and took him to the Palic Zooexternal link in Serbia. Curator Kristijan Ovari says he was in a poor state, "His fur and teeth were in bad condition. He kept pacing up and down. He had to learn to trust the keepers".

A protein-rich diet allowed him to build up muscle and he was in a good condition when he left the zoo in July. Ovari says the keepers were sad to see him go, "It was hard for us to part with him as we had grown to like him. He is very intelligent, very curious. He’s always the first there to see what’s happening".

His transfer to Switzerland was orchestrated by the Four Paws external linkanimal rescue foundation, which is providing five rescued bears in total for the Arosa sanctuary. Transporting the 350 kilo animal took 28 hours and presented quite a challenge, visible in this video.

Napa, who is 12-years-old, had to be tranquilised as he refused to get into his crate voluntarily. This gave the veterinary team a chance to carry out a proper medical examination before departure.

Arosaexternal link, at 1,800 metres above sea level, has been a famous Alpine health resort since 1877, and to get there, Napa had to be taken up in a cable car. He will be allowed outside at the sanctuary in Arosa at the beginning of August, and swissinfo.ch will be there, following the action. At the moment, he's getting used to his new mountain home in his indoor enclosure.

Part 1: Freed From Serbia to the Swiss Alps: a bear's adventure

After being freed from a cage at a circus, and recovering at a Serbian zoo, Napa the bear is now having a Swiss adventure.

If all goes to plan, Swiss mountain resort Arosa will soon have a park for rescued bears.

A bear wandered into a Swiss ski resort on Monday, sparking excitement among the few onlookers.

On May 26, the Swiss canton of Bern got its first confirmed bear sighting in more than 190 years.

Game over Switzerland’s only wild bear is shot

The brown bear known as M13 has been killed after it proved impossible to keep him away from human settlements. 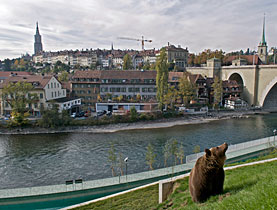 After nearly two years' construction, one of the Swiss capital Bern's top attractions, the city's bears, have moved into a new – and more animal ...