Sixty years on, an agency first set up with a three year mandate to aid Europeans scattered by war, has helped some 50 million people worldwide rebuild their lives.

The Geneva-based Office of the United Nations High Commissioner for Refugees, or UNHCR, which celebrated its anniversary in December, is now active in 118 countries.


It was in 1956, when the Soviet Union crushed the Hungarian revolution, that the agency faced its first major emergency, helping some 200,000 Hungarians who fled into exile.

After that turning point, “Any expectation that the UNHCR would become unnecessary has never resurfaced”, as the organisation says on its website.

Europe in the immediate aftermath of the Second World War, Eastern Europe during the Cold War, the often messy decolonisation of Africa and Asia, the secession of East Pakistan (now Bangladesh), repression and civil conflict in Latin America, the war in the Balkans, crises in Central Asia – just some of the situations which have made millions of people into refugees over the past decades.

Many of them return home once things are safe again, but others find new lives somewhere else in the world. Others again spend years in camps waiting for a solution. In all cases the UNHCR is there to help.

“It’s supposed to be a non-political organisation, of course, but the questions it focuses on have always been influenced by politics,” Jussi Hanhimäki, professor of International History and Politics at the Graduate Institute Geneva, told swissinfo.ch.

This can create difficulties; Hanhimäki cites the example of Afghanistan in the wake of the Soviet invasion of 1979 – one of the longest-running refugee crises in the world.

“Pakistan accepted the UNHCR presence; however, Pakistan had a clear-cut political interest in the struggle, so some of the refugee camps in Pakistan effectively became training camps for the mujahideen [the anti-Soviet resistance], and that of course wasn’t exactly a non-political activity, and created issues with UNHCR’s own mandate.”

“The second problem was that the second main receiving country from Afghanistan was Iran, which after 1979 did not recognise the UNHCR, so they weren’t able to operate within the borders of Iran.”

There are always legal issues in any refugee crisis, Hanhimäki says, since the UNHCR is empowered to provide more help when people are legally defined as refugees.

In its statistics, the agency speaks of “people of concern”, about half of whom are recognised refugees, while the rest are waiting for their status to be determined.

“To be recognised as a refugee gives you certain legal protection; you have a right to get legal advice from the UNHCR, for example, and you will not be forced to go back to wherever you have come from,” Hanhimäki explained.

Nevertheless, the UNHCR provides humanitarian care to all those in its camps, whatever their status.

“This is one of the key functions that makes that organisation important. If they’re not there, what’s going to happen to these people?” he said.

One important function of the agency is to resettle refugees before the crisis becomes permanent. There are cases today where a whole generation has known only life in a refugee camp.

But there have been successes too: Europeans after the Second World War and refugees from Indochina after the Vietnam war have found new homes all over the world.

But resettlement depends on the willingness of countries to accept them, and that may turn on such things as the domestic economic situation and the need for labour, or on cultural and racial prejudices.

Launching the 60th anniversary celebrations, High Commissioner Antonio Guterres pointed out that many of the factors now causing people to be displaced did not exist when the UNHCR was founded.

“More and more are crossing borders because of extreme poverty, because of the impact of climate change, [and] because of their interrelation with conflict,” he said.

For many people the action of UNHCR had represented life instead of death, enabling them to find homes and enjoy good health and protecting them against violations of their human rights, he added, but new challenges require new responses.

"We have many reasons to be proud, but we also have much more reasons to be concerned with the challenges we face at the present moment."

“Unfortunately the root causes of conflict and displacement are not being eliminated and the next few years will be as challenging as the past," he warned.

History of the UNHCR

The UNHCR was established on December 14 ,1950, initially for three years, to help Europeans displaced by the Second World War.

The United Nations Convention relating to the Status of Refugees was adopted on July 28, 1951.

In 1954 its mandate was prolonged to the end of the decade. It won the Nobel Peace Prize the same year.

Its first major crisis was in 1956, when about 200,000 Hungarians fled the Soviet invasion.

In the 1960s, the decolonisation of Africa and Asia displaced huge numbers of people.

The largest single displacement was in 1971, when about 10 million Bengalis fled their homes in the war that ended with East Pakistan splitting from West Pakistan and becoming Bangladesh.

The UNHCR’s mandate does not cover Palestinian refugees; they have their own agency, the UN Relief and Works Agency, which predates the UNHCR.

When it was founded, it had a staff of 34, and now employs 6,650 people, including 740 in its headquarters in Geneva.

There are now 34.4 million “people of concern” to the agency in the world as a whole.

Of these, 14.4 million are internally displaced (i.e. still living in their own country, but not in their original homes); 10,5 million refugees, two million returnees, 6.6 million stateless people and more than 800,000

Migrants who intend to go home tend not to integrate, coping with an unfamiliar society can be bad for the health – and not all migrants are the same!

Repatriating rejected asylum seekers has become a thorny issue for Switzerland with some countries reluctant to take back their citizens. ...

Why the Swiss accepted Tibetans with open arms

When Tibetan refugees traded the Himalayas for the Swiss Alps half a century ago and against the backdrop of the Cold War, they found a warm welcome. 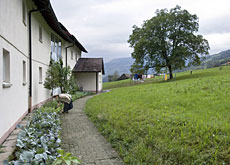 The Swiss government has refused to take in official groups of Iraqi refugees but Iraqis are continuing to arrive independently in Switzerland. ...

For more than six decades the United Nations refugee agency has been helping the world’s uprooted peoples. The agency’s first task was to help an ...