The Senate has rejected a proposal to use most of the proceeds from the sale of Switzerland's excess gold reserves to help prop up the state pension scheme.

Parliamentarians voted on Tuesday in favour of giving the cantons two-thirds of the funds raised, with the remaining third for the federal government.

Earlier this year Switzerland's other parliamentary chamber, the House of Representatives, supported a proposal to invest the bulk of the proceeds in the old-age pension scheme.

The difference of opinion between the two chambers is nothing new.

Parliamentarians have been trying in vain to decide what to do with the proceeds from 1,300 tons of excess gold since 1997.

Over the past seven years, parliament and Swiss voters have been asked to decide on a number of proposals.

In a nationwide vote in 2002, the electorate rejected a plan to set up a so-called Solidarity Foundation, which would have donated some of the money to humanitarian causes both at home and abroad.

Voters also turned down an alternative proposal by the rightwing Swiss People’s Party to invest all the money in the old-age pension scheme.

Following the public’s rejection of the two proposals, new ideas on how to distribute the proceeds emerged.

One suggestion that a share of the money should be used to fund education projects for young people has already been thrown out by parliament.

The Swiss constitution stipulates that the reserves should be split between the federal authorities and the cantons in the way outlined in the Senate proposal – and this is how the money will be divided unless the two parliamentary chambers can agree on a different plan.

The next step will be for the House of Representatives to debate the proposal approved by the Senate.

In a related move on Tuesday, the Senate also discussed what to do with the SFr3 billion ($2.4 billion) surplus generated by the Swiss National Bank each year.

Under the current system, the cantons receive two-thirds, while one-third is earmarked for the federal government.

Parliamentarians voted in favour of maintaining the status quo, and threw out a proposal to give SFr1 billion to the cantons and invest the remainder in the state pension scheme.

The government had previously come out against the plan, arguing that it would not guarantee the long-term security of pensions.

According to the Swiss National Bank (SNB), 1,170 tons of excess gold were sold between May 2000 and September 2004.
The SNB expects to have disposed of the remaining 130 tons by March 2005.
Last year the SNB made a surplus of SFr3 billion. 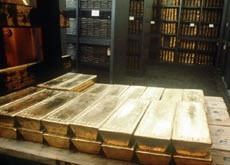 Parliament has taken a first step towards agreeing to spend most of the proceeds from the sale of the Swiss National Bank’s excess gold reserves ... 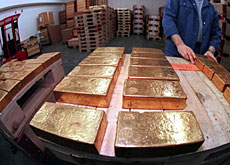 The cabinet has put forward plans to share the proceeds from the sale of its excess gold reserves between the federal government and the cantons. ...