Switzerland has reported its first case of swine flu: a young man, who has just returned from Mexico, has tested positive for the virus.

The cantonal hospital in Baden, near Zurich, made the announcement during the night to Thursday.

The 19-year-old man's condition is said not to be life threatening. He is stable and being treated with Tamiflu, the oral antiviral drug produced by Swiss pharmaceutical group Roche.

At first the man's condition was incorrectly diagnosed after a misinterpretation of the result and he was sent home from hospital. But on Wednesday evening, the swine flu virus was diagnosed after a second test by the national influenza laboratory in Geneva.

It is not clear whether specialists in Baden or Geneva were responsible for the mix-up.

The man is being held in isolation in hospital. All those who had had contact with him had been informed, the authorities said.

On Thursday morning the health authorities said there were 29 suspected cases of swine flu in Switzerland in the cantons of Geneva, Vaud, Valais, Bern, Zurich, Basel Country and St Gallen.

The patient in Geneva is said to be particularly likely to have been contaminated.

In a reaction to the news, Federal Health Office director Thomas Zeltner said there was "no cause for any great alarm".

He told a Zurich local radio station that one or two cases were to be expected in Switzerland after the disease had been confirmed in other European countries.

In a related development, the government has activated a special task force aimed at "accelerating administrative processes" in the fight against the spread of the disease.

The World Health Organization late on Wednesday raised its pandemic alarm level from four to five, in the light of the virus's spread.

This means the Geneva-based WHO believes a pandemic is very likely. WHO head Margaret Chan has called on all countries to activate their pandemic emergency plans.

"It really is all of humanity that is under threat during a pandemic," Chan said. "We do not have all the answers right now, but we will get them."

For the time being, the WHO is advising no restrictions on regular travel or closure of borders.

This swine flu variation, termed H1N1, is an influenza A virus spread from person to person.

It contains DNA from avian, swine and human viruses. Although swine flu viruses normally infect only pigs, they do sometimes cross the species barrier to cause disease in humans, according to the WHO.

It is passed from human to human by sneezing, coughing or by hand contact. The WHO says swine flu is not transmitted to people eating properly handled and prepared pork or other products derived from pigs.

New flu strains can spread fast because no one has natural immunity and a vaccine can take months to develop. 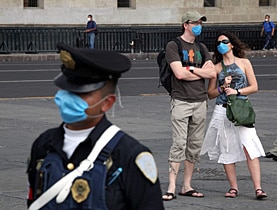 As more cases of swine flu are confirmed around the world, a Swiss living in Mexico City tells swissinfo how locals are coping with the ... 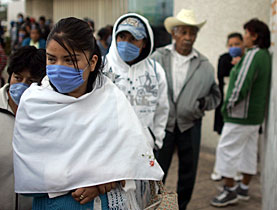 The swine flu virus which is believed to have killed up to 149 people in Mexico may have contaminated five Swiss, according to the Federal Health ... 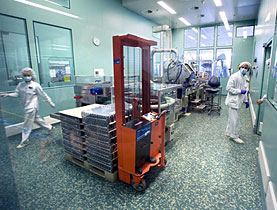 Anti-viral drug Tamiflu must be used with care to avoid the new strain of swine flu developing resistance, an expert on infectious diseases has ...