The Swiss foreign ministry has confirmed it is supporting a plan by former United Nations Secretary-General Kofi Annan to set up a humanitarian foundation in Geneva.

Reacting to newspaper reports on Sunday, a spokesman said the ministry was working in this direction with different partners, with Annan expected to play a leading role.

Johann Aeschlimann told the AP news agency that the project was in its first phase of development and that it was still too early to say what form the foundation would take.

At this stage official Swiss participation in the plan is open. The cabinet will consider the move during the course of the year, said Aeschlimann.

According to a report that appeared in the Zurich-based NZZ am Sonntag newspaper, Annan wants to create an international humanitarian forum in Geneva. It would organise a big annual conference and different regional events.

The 69-year-old Annan ended his second five-year term as UN Secretary-General at the end of 2006 and was replaced by the South Korean, Ban Ki-moon.

Since then Annan has been living in Geneva and the Ghanaian has previously indicated his interest in working on humanitarian projects, said NZZ am Sonntag.

The newspaper reported that the project had been developed in conjunction with the Swiss foreign ministry and the Swiss Agency for Development and Cooperation (SDC).

It indicated that locations were under consideration in the centre of the international Geneva quarter and that the forum could come into effect this year.

Officials in Geneva, already the home of many international organisations, have welcomed the news.

"It is the crowning of Geneva has the world capital of humanitarian law," Jean Ziegler, the UN special rapporteur on the Right to Food, told the newspaper.

He added that it was a further success for Swiss foreign policy following the creation of the new Human Rights Council which is based in Geneva - a project supported by Switzerland.

Several Geneva politicians have also added their voices, saying that, if realised, the forum would make Geneva very proud. They added that it would also be a "good sign" for the city.

Annan is known to have a fondness for Geneva. He studied at the city's Graduate Institute of International Studies from 1961-62 and began his UN career there at the World Health Organization. He also he met his wife, Nane Lagergren, a Swedish lawyer, in the city.

"Geneva stands for tolerance, peace and democracy," Annan said at his UN farewell celebrations in Geneva last year. "The Rhone is a meeting place for the world's languages, religions and cultures."

Kofi Annan was born in Ghana in 1938. He studied economics in Ghana and the United States, and also spent time in Geneva.

As the seventh UN Secretary-General, Kofi Annan began his first term in office in 1997 and was appointed for a second term in 2001. He retired at the end of 2006.

In 2001 Annan and the UN received the Nobel Peace Prize. It was during his era that Switzerland finally joined the UN in 2002, after membership was approved by a nationwide vote.

In 2003 he was awarded the St Gallen Max Schmidheiny Foundation Freedom Prize.

In 2006 he received the Geneva Foundation Prize in thanks for his contribution to the city. 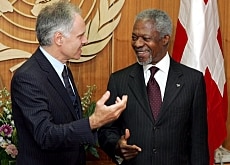 Kofi Annan, the outgoing Secretary-General of the United Nations, has thanked and said goodbye to staff at the UN's headquarters in Geneva. "This ...