Our regular analysis of developments in the world of fintech and Crypto Nation.

Property has for some time been hailed as prime real estate for blockchain disruption. The incorruptible ledger will replace mountains of paperwork while interested parties will have a sovereign claim to validate transactions in property sales.

We are also told that smart contracts will replace notaries, speeding up transactions and cutting costs. And the nimble blockchain will make short work of carving up shares of buildings into bite-sized chunks for small investors.

So it comes as some surprise that one of Switzerland earliest blockchain real estate projects, SwissRealCoinExternal link, has been put on ice as it figures out “new set-up options”. Insiders are privately saying the market is not yet ready for blockchain innovation. SwissRealCoin simply arrived too early with a great idea – which included a stablecoin pegged against its property portfolio.

It seems the Swiss financial regulator was also of the same opinion, as reported last year. And perhaps it had good reason, given the amount of illicit funds reputedly laundered by bricks and mortar globally, including Switzerland.

In the summer, rumours were rife of a multi-million euro property deal that another Swiss blockchain real estate firm was about to clinch in European. Weeks have dissolved into months, and still nothing doing.

So what’s going on? Is the market indeed too conservative or tech-unsavvy for such a fundamental shift? Are investors sceptical of blockchain? Is the regulator concerned that more money will be laundered through house number 8 down the street?

However, never let it be said that a couple of setbacks will bring the house crashing down. Dubai-based property developer Emaar Group is using the services of Lykke and Bitcoin Suisse to launch a token-based referral and loyalty programme. Blockchain real estate firm Elevated Returns is tokenising property on the Swiss-based Tezos platform.

As it happens, that CHF3 million deal threw up another conundrum. How do you legally transfer property rights via a purely digital instrument. Blockimmo got around the problem by creating a company, putting the properties inside, and selling shares of the firm on the blockchain.

It’s a trick they are repeating to sell security tokens for potential investors in the Brazilian smart city project Polo Multimodal PecémExternal link. In the meantime, Swiss lawmakers are scrambling to update company and financial rules for the blockchain age, including the transference of digital assets. This, however, may take a couple of years.

If you’ve got anything to say about these subjects or have stories you would like to see covered, drop me a line: matt.allen@swissinfo.chExternal link 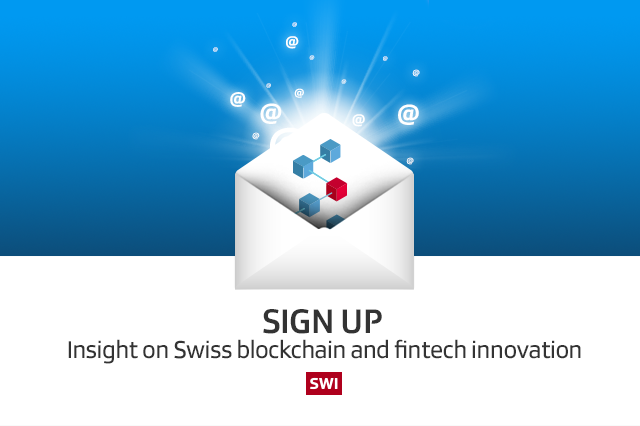 Newsletter subscription for for Fintech