A debate about Islamism has flared up between the West and the Arab world. We should express our solidarity with France and its President, Emmanuel Macron, writes political scientist and human rights activist Elham Manea. 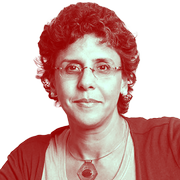 Elham Manea is an associate professor at the Institute for Political Science at the University of Zurich. She is an author and a human rights activist.

In early October, Macron gave a speech about his fight against separatism, which has stirred up many reactions.

Macron as “Islamist separatism”, in which religion is placed above France’s laws and principles, such as gender equality. He announced a series of measures to put a stop to this segregation. Among other things, homeschooling will now only be allowed for health reasons.

Elham Manea is an associate professor at the Institute for Political Science at the University of Zurich. She is an author and a human rights activist.

However, critics have accused Macron of “stigmatising Muslims” instead of focusing on the issues raised. Some Arab countries have called for a boycott of France.

Calling the problem by its name

What we are witnessing is a strategy often deployed by Islamic organisations and states: divert attention from the matter at hand – Islamism – conflate Islamism with Muslims and Islam, and embrace a victimhood discourse, which always follows the same lines: “Islam is being attacked, Muslims are being stigmatised – and the world just looks on."

Why the current anti-terror debate is flawed

I am a Swiss-Yemeni academic of Islamic faith who, among other activities, researches and teaches the ideology, context and consequences of Islamism in its various forms. I support the measures taken by French President Emmanuel Macron. He called the problem by its name. And it takes courage to do that.

I support Macron because the problem is well documented: In a 2004 report, the then inspector-general for education, Jean-Pierre Obin, noted the existence of a separatist worldview with respect to French schools. Based on field work carried out in 60 establishments, he described, among other things, toilet facilities that had separate washbasins for Muslims and “French”, and separate changing rooms in sports halls. A local official explained the reason for the latter: “Circumcised youths should not sit next to impure youths [sic]”.

The report also documented how girls aged 14 and 15 were forced into marriage. It further described a political strategy of entryism, or infiltration, whereby Islamist missionaries are encouraged to take on certain jobs in schools for the purpose of proselytising.

Failings of the French State

Of course, one may question the timing of Macron’s speech – elections are coming up soon.

It is also true that the French state is itself partly to blame for the problem, having neglected its banlieues. In these working-class suburbs around the major cities, closed communities have emerged that have become fertile recruiting ground for Islamist groups.

Young people there have been abandoned to unemployment, xenophobia, poverty and a macho code of conduct. The absence of the state has left a vacuum that was filled by Islamist structures, generously supported by transnational Islamist organisations and governments.

Switzerland is no island

These patterns and structures are not unique to France. They also exist in other European countries.

When it comes to Switzerland, however, the situation cannot be compared to France. For one thing, it does not have the same kind of segregated, closed communities – although there are trends in some cities, where certain ethnic and social groups are very strongly represented, in particular in the cantons of Basel City, Zurich, Geneva, Vaud and Fribourg.

At the same time, Switzerland is not an island, and it is not immune to developments taking place around it. The link between Switzerland and the recent terrorist attack in Austria is evidence of this. I am not just talking about jihadist tendencies here, but also about the ideology of Islamism (political Islam) and its worldviews. These are particularly prevalent in the cantons of western Switzerland.

Moreover, a recent study by the University of Lucerne found fundamentally anti-democratic religious-political convictions among a proportion of Muslim youth (21%) in Switzerland. How these attitudes arise and are nourished – for example, through a patriarchal and authoritarian upbringing or religious instruction – was not tackled in the study.

The time has therefore come to examine more closely the religious educational structures of mosques in Switzerland that are affiliated with Islamist movements, as well as the religious structures of countries that promote political Islam. I understand the sensitivity of the subject, but it is only through careful research and investigation that we can address the problem without stigmatising an entire religious community.

The French measures are designed to deal with a serious problem that has been left untouched for a long time. We should express our solidarity with France and Macron. The French president is taking a courageous stand against an ideology of separatism. Instead of criticising him for his message, we ought to heed it: It concerns us too – all of us.

swissinfo.ch publishes op-ed articles by contributors writing on a wide range of topics – Swiss issues or those that impact Switzerland. The selection of articles presents a diversity of opinions designed to enrich the debate on the issues discussed. If you would like to submit an idea for an opinion piece, please e-mail english@swissinfo.ch.