Meeting in San Sebastián last week, experts from more than 30 countries discussed ways to fend off attacks against participatory democracy. An international conference in Spain’s Basque Country provided some answers both in a local and global context.

Set against a series of ballot box upsets – notably in the United States, Britain and Colombia – activists, state representatives and academics exchanged ideas about granting citizens a direct say in political decisions.

“2016 has been a very intense year for direct democracy. But has it also been a good year?” asked David Altman, professor of political science in Chile.

Andreas Gross, a leading Swiss expert on direct democracy, said it was crucial to make a clear distinction between elections, votes on people’s initiatives and ballots on government-sponsored decisions, such as in Britain, Colombia or Hungary.

Salvör Nordal, director of the Ethics Institute at the University of Iceland and former chairwoman of the country’s constitutional council, said people’s initiatives were the best way to bridge the gap between the people and the political elite. It could also help stop the rise of populist leaders, she believed.

Representatives from Spain’s Podemos (“We can”) movement as well as from Italy’s Cinque Stelle (Five Stars) group stressed the importance of digital tools to promote and develop direct democracy in their countries.

Several experts also highlighted opportunities and risks for democracy from the growing impact of social media.

Read the report by swissinfo.ch’s Renat Künzi in the original German versionexternal link.

At the Global Forum on Modern Direct Democracy 2016, some 200 experts are gathering to help push forward the development towards more local democracy.

The city of San Sebastián plays host to this year’s Global Forum on Direct Democracy, but the local authorities have had some teething problems ...

By Urs Geiser and Renat Künzi

How much of a blow to democracy is the election of Donald Trump as president of the United States?

Political Culture from Local Participation to Global Coexistence is the theme of this year’s Global Democracy Forum in Donostia. 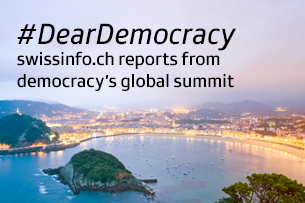 Ongoing coverage of the 2016 Global Forum on Modern Direct Democracyexternal link, an international conference about the role of citizen power in today's world.