Switzerland will likely join the EU in granting visa-free access to Turkish citizens as part of a controversial agreement on migration with Turkey. But travellers from many other countries need a visa to enter the Alpine nation. swissinfo.ch took a closer look at how Switzerland divides up the world when it comes to visas. 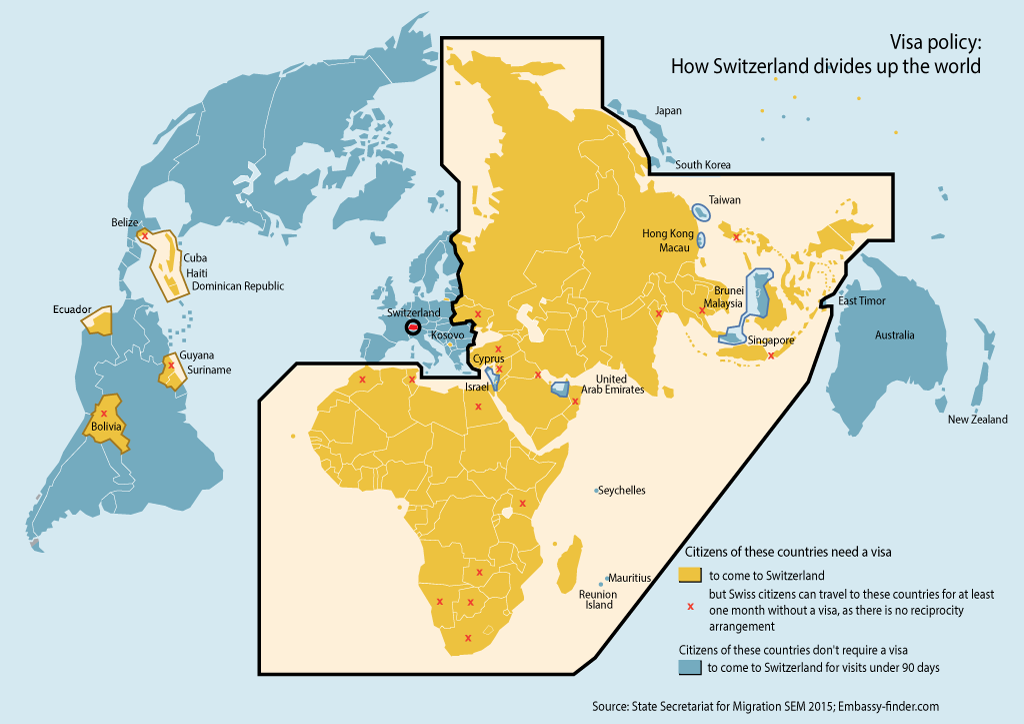 Spending a holiday in Switzerland, attending a conference or a festival or visiting a friend or relative here can be a simple or a complicated matter depending on your country of origin.

Like most countries, Switzerland closely monitors the entry of foreign nationals into its territory. For Swiss immigration purposes, the world is divided in two: on one side of the divide are those who can enter freely for a period of up to three months (without rights to engage in paid work); on the other are those who need a visa, and can’t always get one.

Switzerland can even require financial guarantees from people applying for visas, and for Bolivians, requesting a visa means going to the nearest embassy - in Peru.

Since the last war, Swiss policy on visas has had to strike a balance between geopolitical, economic and security interests, explains Raoul Kaenzig, a researcher at the University of Neuchâtel and author of a thesisExternal link on the topic. Once Switzerland joined the Schengen area in 2008, it had a lot less room for manoeuvre when it came to short-term visas. Turkey looks like being a case in point.

Assuming the migration accord between Brussels and Ankara goes into effect, Switzerland will probably have to allow Turks in without a visa. But this is not automatic. Though it has never happened yet, Switzerland could object to the loosening of restrictions, letting the Swiss people vote on it, as the spokesperson for the migration office, Céline Kohlprath, points out. The stakes are high, however – the accord has been designed to close off the refugee route through the Balkans – and Switzerland could expect a lot of pressure from the EU if it declined to cooperate.

The requirement of a visa for foreign nationals also depends on factors within Switzerland, such as business needs.

“Some sectors like tourism are not too happy with the restrictions imposed on some countries, and several times they have called for a more relaxed approach,” says Kaenzig.

In 2004, a politician from the tourist-dependent canton of Valais, Christophe Darbellay, asked the government to facilitate access for Chinese visitors, pointing out that they spend around CHF450 a day. His request brought some relief for tour groups.

Tourists may be welcome, but Swiss policy aims to minimise the risk of illegal immigration. This criterion was decisive in the case of North Africa, as Kaenzig explains. Faced with increasing immigration by Tunisians, Algerians and Moroccans, Switzerland decided in 1990 to impose visa requirements again after nearly thirty years of visa-free travel. The same happened with certain Latin American countries, notably Ecuador and Bolivia.

Several researchers have pointed out that visa policy is used to make refugee status harder to get. This link is hard to prove, says Kaenzig, though it is true that the countries that send most refugees to Switzerland – Eritrea and Syria, not forgetting Sri Lanka – are all subject to the visa requirement. 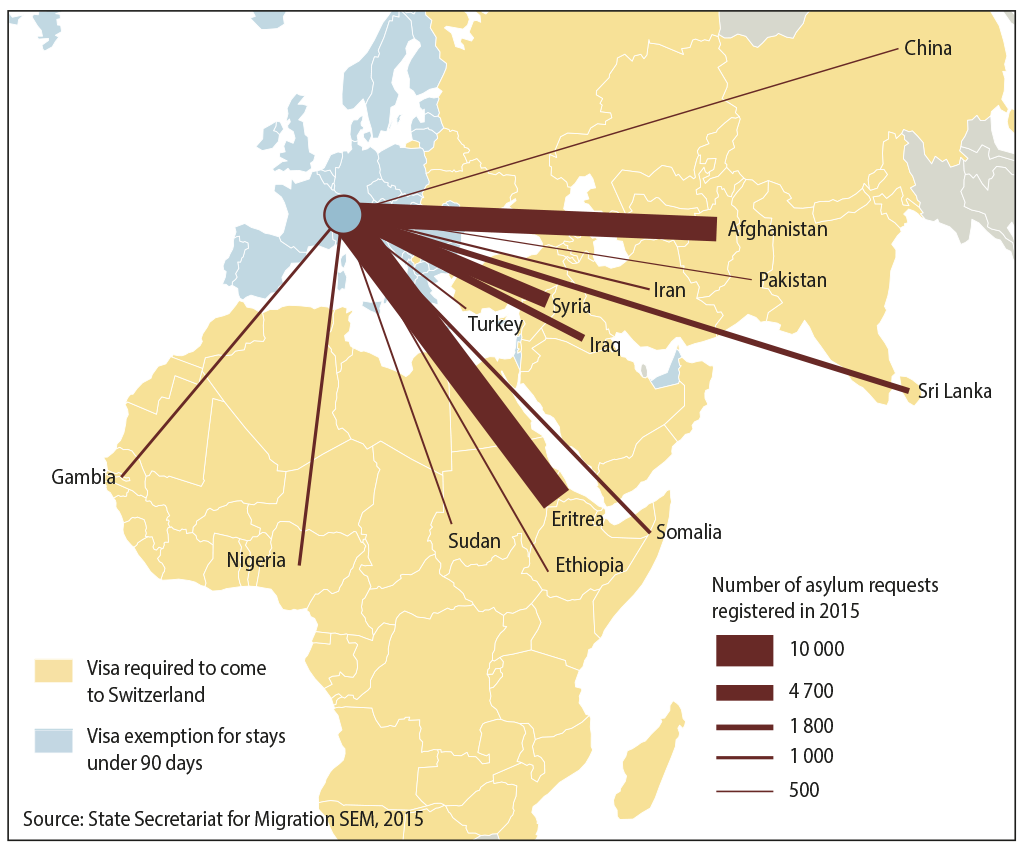 What about the liberty of Swiss to travel the world? According to a study published in February by Henley & PartnersExternal link, Swiss can enter 172 countries without a visa or with a straightforward on-arrival visa stamp. In the classification of passports that open the most doors, the Swiss are in sixth place, with the Germans (177 countries) and  Swedes (176) at the top.

However, visa-free privileges are not always reciprocal: The Swiss can go to Peru, Bolivia, Morocco and Egypt without a visa, but nationals from these countries need one to enter Switzerland. In some countries, getting a visa is just a formality which can be dealt with on arrival at the airport. Nothing like the obstacle course some of the foreign nationals who want to travel to Switzerland are subjected to.

Requests from Indians increased 20.5% last year. On a world scale, one out of four visas were issued to Indian nationals.