When she visits African countries, Swiss parliamentarian Isabelle Chevalley asks to be taken to rubbish dumps.

She believes helping Africans to recycle waste, create jobs and clean up the environment can help African countries learn from the mistakes of the West and “go faster” along the path to sustainable development.

“I need to see what they are putting there in order to propose a solution,” she says. Obviously, that sometimes causes a stir, like in Liberia where the government insisted on giving her bodyguards and a nice car with smoked-glass windows. “You should have seen the face of the rubbish dump director!” she says. “I am sure he is still talking about how a white woman came here and wanted to photograph the rubbish!”

Chevalley, 45, is a member of the Swiss federal parliamentexternal link for the centrist Liberal Green Party. When she is not in parliament or campaigning for a nuclear-free Switzerland, she is often in Africa. She thinks Western countries should embrace recycling projects if they do not want to be overwhelmed by millions of jobless Africans.

Her energy and passion seem boundless. Her “African stories” include putting her own house up as guarantee to get a loan for potato farmers in Burkina Faso, helping find out why elephants in Zimbabwe get “floppy trunk” disease, photographing uranium mines in Niger and facilitating transfers of medical equipment from the University Hospital of Lausanneexternal link (CHUV) to the hospital in Bobo-Dioulasso, Burkina Faso. She has also worked in the Democratic Republic of Congo, Mali, Liberia, Tanzania, South Africa, and the Comoros.

Now she plans to clean up a huge waste dump in Dakar, Senegal, and is finalising a book on waste recycling, aimed at an African audience.

Listening to Chevalley talk can make you feel a little dizzy. But Isabelle, who studied chemistry at the University of Lausanneexternal link, has a pragmatic approach. If you want to get things done, she says, it’s all about economics. Her main focus in Africa is recycling waste. “One person’s rubbish is another person’s raw material,” she explains. “All you need to do is learn how to recycle it and find a buyer.”

A heart in Africa

So why is she so passionate about Africa? She says it started when she was at university in Lausanne, where there were many African visitors and interns. “I come from a small Swiss village (St-George, in canton Vaud),” she says. “Did I see an African face in my first 15 years? Maybe on the television, but not for real, and so I was not at all used to African culture.  And then a Comorian I was working with said one day `Isabelle, why don’t you come and visit us in the Comoros? I will introduce you to my family`. I thought why not. And that trip was quite a revelation, because I saw the kindness of these people who do not know you but welcome you as a member of the family.”

Since then, and for the last 20 years, Isabelle Chevalley has been travelling the African continent, enjoying the music, the warmth, taking photos and sharing her environmental expertise.

She is also the founder of the Swiss-African parliamentary intergroup which holds meetings in the Swiss capital Bern on common issues of concern, such as agriculture, energy, infrastructure and research. The idea, she says, “is always to show the links between Switzerland and Africa on these different issues”.

“Today everyone is talking about global warming, but I think our biggest problem is waste, because waste is polluting the air, the earth and the water for the long term,” Chevalley says. “Once heavy metals are in the water or the earth it is almost impossible, or at least very costly, to get rid of them. Sooner or later they will end up in the food chain and we will eat them in our food. This is slow poisoning, so we will continue to eat them until we get sick. And then it will be too late.”

She says governments, including in Switzerland and the West, need a new approach to recycling all waste, from aluminium and heavy metals to plastic. Asked if her approach to environmental problems is the same in Switzerland and in Africa, she says categorically not. “In Africa, the State tends to be weak,” she says. “So, you need to start with the people, to make them more aware and responsible.”

Depending on the local dynamics, she says this can be through cooperatives and associations, or sometimes local authorities - and it works. She cites the example of a project she helped launch in Bobo-Dioulasso, Burkina Faso, where an association of local women (“GAFREHexternal link”) is making handbags out of recycled plastic.

“The women go with donkeys and carts to collect people’s rubbish,” she says. “People pay CHF3 a month for the rubbish collection. The women take it away and put it in a dump, because at the moment that is the only solution available. But they sort the plastic bags, which are everywhere. They wash them, cut them up and sew them into unbelievable bags. This activity now pays the salaries of 100 women, plus their operational costs, and they recycle 15 tonnes of plastic bags (per year).”

Isabelle Chevalley’s current big project is to clean up the Mbeubeuss waste dump in the Senegalese capital Dakar, which she says is one of the biggest in the world and “stinks to high heaven”. According to Chevalley, this dump covers 60 hectares and some 3,500 people work there recycling waste, but only 10% is currently recycled. “My aim is to recycle more, and to burn the rest in a cement factory in place of coal,” she says.

She explains that while traditional methods of incineration produce toxic dioxins from plastics and harmful ashes, burning at a much higher temperature (2,000 degrees) in a cement factory does not produce dioxins, and the ash can be used in cement.

Chevalley has held dozens of meetings in recent months with potential partners and funders, and has obtained the support of French group Vicat, which has a cement factory in Dakar.  However, a meeting with the World Bank over possible funding did not go so well, with the Bank representative expressing scepticism over her plans.

Chevalley says finding start-up funding is one of the major challenges she faces, and “persuading people who still have the same methods in mind, that is, hiding or burning. We need to say no, today there is a third way, which is recycling and burning in cement factories.”

She says external investment may be necessary for the first two to three years of a project, to pay for infrastructure, train people and because “you need to start selling to get the first revenue that will fund salaries”. After that, she says, the project should pay for itself.

Asked about her main ambition, Isabelle laughs, then suggests it is to “clean up the world”.  “I really hope these initiatives will generate others, she continues. “That is why I am writing this book. The aim is not to keep all this knowledge to myself because that is no use. I cannot do it alone. There need to be lots of these projects everywhere. And wherever I can go to facilitate them, I will go.”

Minamata Convention Mercury pollution watchdog to set up in Geneva

Geneva will play host to the body responsible for implementing a global convention to reduce mercury pollution. Some 150 countries voted in favour ...

Old construction materials have huge potential for recycling: over 2,000 demolition permits are granted each year in Switzerland, and a lot of the ...

Fact Check Is Switzerland the world champion of recycling?

Finding international studies on recycling may be easy, but crowning a champion is not.

It’s rubbish! How the Swiss deal with waste

Switzerland scores well in areas like innovation and quality of life, but it’s also a champion at waste generation.

Swiss at odds over roadmap to nuclear-free future

One year after the Fukushima atomic disaster in Japan, Switzerland is facing a long road ahead towards its intended goal of a nuclear-free future.

Each year, millions of migrating birds fly over Switzerland – but for some, the journey ends in the blades of a wind turbine. A Swiss company has ... 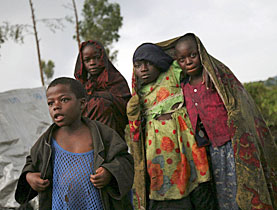 A Swiss charity is helping victims of the largely forgotten war in the Democratic Republic of Congo to rebuild their shattered lives. The Swiss ...