Switzerland has agreed to establish an independent complaints mechanism for victims of police brutality. This is one of 160 recommendations it has approved following last year's peer review of its human rights record at the United Nations in Geneva.

On Thursday, the Geneva-based UN Human Rights Council adopted the final report for Switzerland’s Universal Periodic Review (UPR),external link a process that takes place every four years. The next is due in 2022.

Switzerland has also agreed to support the creation of a mechanism for collaboration between authorities and civil society to implement UPR recommendations. A measure long desired by a Platform of 80 NGOs.

+ Switzerland defended its human rights record before the UN

The Swiss authorities meanwhile rejected 90 other recommendations by states concerning its rights record.

A platform of Swiss NGOexternal links described Switzerland’s final report as “mixed” overall. The Swiss branch of Amnesty International welcomed commitment to create a truly independent national human rights institution in accordance with the Paris Principles (which set the framework for such an institution). But the NGO criticized Switzerland’s hesitancy to take on board changes to ensure popular initiatives are compatible with international law.

During Switzerland’s presentation to the UN rights council last year several states urged greater efforts to fight racism, to stop violence against women and to improve the integration of migrants. Bern has agreed to do more to combat discrimination.

The Swiss authorities also say they plan to launch independent investigations into alleged cases of excessive use of force during the explusion of illegal immigrants. They have also acknowledged the need for tougher penalties against human trafficking.

A UN expert has called for tougher sanctions and other measures to keep so-called ‘dirty money’ from entering Swiss financial markets.

Ignazio Cassis said states must reject a world where the “law of the strongest” prevails during his speech at the UN Human Rights Council.

The forced separation of asylum-seeker families in Switzerland came under scrutiny in Amnesty International’s annual report, released on Thursday.

Switzerland has been defending its human rights record before the Geneva-based United Nations Human Rights Council.

By Frédéric Burnand in Geneva

The Council of Europe’s Commissioner for Human Rights has urged Switzerland to stop detaining migrant children arriving at Swiss international ...

Switzerland has vowed to improve its human rights record and has accepted 100 suggestions by other states at the UN Human Rights Council.

By Simon Bradley, in Geneva

Can do better Swiss vow to improve human rights situation

Switzerland has accepted 50 recommendations made by other states as part of a human rights peer review process carried out by the United Nations ...

United Nations member states have urged Switzerland to step up its fight against racism, discrimination and human trafficking, create a proper ... 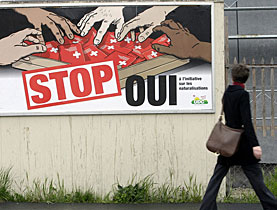 Switzerland has been defending its human rights record before the Geneva-based United Nations Human Rights Council as part of the Universal ...