Solar Impulse on Thursday became the first ever manned solar-powered aircraft in aviation history to fly through the night with no fuel.

The revolutionary new plane conceals a wealth of state-of-the-art technology and innovative design. Some 80 partners, including many Swiss companies, have helped conceive, build, test and fly the prototype.

A jubilant and exhausted André Borschberg, the Swiss pilot and CEO of Solar Impulse, touched down at Payerne airfield north of Lausanne at 9am after a successful 26-hour fuel-less flight over the Jura mountains and Lake Neuchâtel, west of the Swiss Alps.

Helpers rushed to stabilize the pioneering plane as it touched down, ensuring that its massive wingspan didn't touch the ground and topple the craft. Onlookers cheered.

Borschberg said he had experienced "an extraordinary night", saying that the flight had been the most incredible one of his 40-year flying career.

"Just sitting there and watching the battery charge level rise and rise thanks to the sun… And then that suspense, not knowing whether we were going to manage to stay up in the air the whole night. And finally the joy of seeing the sun rise and feeling the energy beginning to circulate in the solar panels again," he said.

The night flight is the latest stage in the solar adventure of Borschberg and co-founder, the adventurer Bertrand Piccard.

"When you took off it was another era," said Piccard, after greeting Borschberg. "You land in a new era where people understand that with renewable energy you can do impossible things."

The two men's next step in the coming weeks is a longer 36-hour non-stop flight to prove that perpetual solar flight is possible.

The long-term objective is to fly a second, lighter plane around the world in 20-25 days in five stages from 2013.

But the goal is not to beat records or to make a globe-trotting trip with solar energy alone, explained Piccard, who made the first non-stop hot air balloon flight around the world in 1999.

“It’s much more than just an aeronautical adventure; it’s a technological demonstration of what we can offer society in terms of renewable energy,” he said. “We want to promote the implementation of the same technologies in cars, heating systems, computers, air conditioning, etc.”

It has taken Solar Impulse’s 50 engineers and technicians, supported by 100 scientists and experts, seven years to take Piccard and Borchberg’s “impossible” SFr100-million ($88 million) solar dream from the drawing board into the skies.

Their challenge was to produce a bigger and lighter aircraft than had ever been built before, which could take off and fly under its own power both day and night, entirely propelled by solar energy.

Bearing in mind future technological advances and seeking the best trade-off between lift, aerodynamics and the largest possible surface for solar cells, the team presented a design in 2006: a glider-lookalike with a 63.4-metre wingspan – the equivalent of an A340 Airbus - but weighing only 1,600kg – less than a small car.

To build the plane Piccard originally went to the United States in search of aircraft construction and solar expertise, but many of the 80 partners are actually Swiss.

“It’s reassuring that in a country like ours we have everything to build a project like this one,” he said.

The ultra-light skeleton-frame fuselage, cabin and wings were made by Swiss composite specialist Decision SA from Ecublens, which built the Alinghi racing yacht, in collaboration with the Federal Institute of Technology in Lausanne (EPFL).

“At the beginning we had a weight objective to reach but we didn’t know how to do it – we thought it was impossible,” explained Decision director, Bertrand Cardis.

After a year of tests, they eventually came up with a honeycomb carbon-fibre sandwich design using carbon sheets weighing just 93g per square metre.

The 200m² upper wing surface is covered with a flexible skin of 11,000 mono-crystalline silicon solar cells, each 150 microns thick, developed by SunPower, in collaboration with Neuchâtel University.

Recent progress in solar cell and battery technology has been “incredible”, said Piccard.

“Compared with 2003, energy efficiency has increased from 16 to 22 per cent and the cells are now half as thick,” said the Swiss adventurer.

Engineers from Solvay have created an electrolyte to help the battery manufacturer Kokam increase the energy density of its lithium polymer batteries from 150 to 240 watt hours per kilogram.

The best aerodynamic specialist from Germany designed the propellers and the Swiss firm Etel from Môtiers built the four “lightest, most efficient motors” which produce the same power as a small scooter.

To achieve efficiency in the air Solar Impulse flies at very low speeds close to its limits, 43-70 kilometres per hour, making it very sensitive to turbulence and cross-winds, and difficult to handle.

“The plane demands lots of attention; there is no autopilot and you can’t snooze,” said Claude Nicollier, the former Swiss astronaut who is leading the flight team. “It reacts slowly as it has entirely manual controls – push rods, cables and direct input mechanisms. You have to get used to it as there is a tendency to overcompensate.”

Swiss watchmaker Omega has developed a special instrument for flight directions and bank angle, which must be kept below five per cent. It has also helped design a vibrating vest and acoustic warning system, together with EPFL, to alert the pilot of unusual movements.

Design work will begin next month on a second plane. Among the changes, the cockpit must be adapted to accommodate a pilot for five days and nights. The plane must have better aerodynamics and provide better flight performances and have different landing gear to be able to land anywhere in the world. But they might use the same wing, said Nicollier.

The plan is for Piccard and Borschberg to take it in turns to fly round the world in five stages in the new plane.

“Technological progress is fast,” said Piccard. “But to be able to fly a two-seater non-stop around the world, we would need a huge technological leap, which is not on the horizon just right now.”

André Borschberg, a 57-year-old former jet fighter pilot, took off from Payerne airfield at 6.51am on July 7.

The 26-hour flight took place over the Jura mountains and Lake Neuchâtel, west of the Swiss Alps, at a speed of approximately 42.6 km/h.

The plane reached its maximum altitude of 8,500m at sunset, when a decision was made to continue through the night using solar power stored in its batteries.

The plane made a slow night-time descent, always within gliding range of Payerne airport to an altitude of 1,500m and landed at 9am.

With no automatic pilot, Borschberg needed to remain permanently alert, helped by a ground control crew in Payerne. Confined to his seat, he snacked on high energy bars, homemade sandwiches, French rice pudding and coffee. With no one to take over from him and no comfort of a toilet, Borschberg also had to relieve himself in plastic bags.

The team had hoped to make its night flight last week, but were stopped by technical problems. The flight took place three months after the plane’s first 1.5-hour flight.

The EPFL, Solar Impulse’s scientific advisor, began a feasibility study in 2003. Seven years of work, calculations, simulations and tests were needed by the 70-person team to complete the aircraft.

Construction of the first prototype began in June 2007. It made its first “flea-hop” at Dübendorf, near Zürich, on December 3. Test flights continued in Payerne from April 2010.

It has 12,000 solar cells mounted onto the wings and horizontal stabilizer, which will supply energy to the four electric motors with a maximum power of 10 HP each.

During the day they will also charge the polymer lithium batteries (400kg), which will allow the aircraft to fly at night.

The electric system, comprising four engines, propellers and cables account for half the plane’s weight.

The plane has a wing loading [the loaded weight of the aircraft divided by the area of the wing] of just 8 kg per square metre, slightly higher than that of a paraglider or handglider, but in relation to its size it is eight times lighter than the best existing glider.

After a successful “flea hop” near Zurich, the Solar Impulse aircraft has moved home to Payerne in preparation for its first high-altitude and ...

Piccard legacy A family piles up the records

Up in the air or down in the deep, breaking records is what the Piccard family has been good at for three generations. 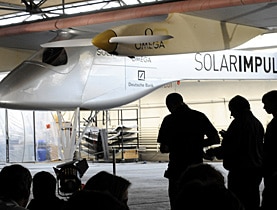 Swiss adventurer Bertrand Piccard has unveiled the prototype of his Solar Impulse airplane, with which he later plans to make the first ever ...