The Bern stadium that staged the 1954 World Cup final is getting its original name back: Wankdorf. Stop tittering at the back.

The original stadium, built in 1925, is part of football lore for the “Miracle of Bern” final in 1954 when West Germany stunned heavily favoured Hungary 3-2 to become world champions for the first time.

Named after the Swiss capital’s Wankdorf neighbourhood, the stadium also hosted the 1961 European Cup final. It was demolished and rebuilt in 2001 and rebranded Stade de Suisse ahead of hosting games at the 2008 European Championship.

Despite raising eyebrows among English-speaking visitors, the Wankdorf name was popular among locals and a petition for a name change in 2004 gathered more than 10,000 signatures.

Young Boys announced the change taking effect next season as part of a five-year deal with biotech firm CSL Behring.

Bern’s Stade de Suisse is not just a football stadium. Home to shops, offices and cultural events, it also has the largest solar roof of any ...

A film about West Germany’s surprise victory over Hungary in the 1954 World Cup final has been a hit at the German box office.

Goal or no goal? How a Swiss decision changed football history

Few English football fans will have heard of Gottfried Dienst, but the Swiss had a significant influence on world football and English culture. 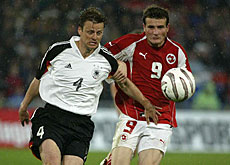 Switzerland's World Cup campaign in Germany marks not only a highlight for the team, but also a continuation of a special football relationship ... 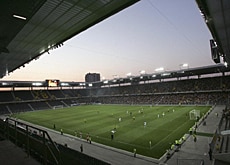 Football, music and culture all come together at the three-day opening celebrations of the Stade de Suisse in Bern on Saturday. The most ...