Swiss students have improved their rating in the latest Pisa test, which measures the skills of students in 29 OECD countries.

In a report leaked to the media on Saturday, the Swiss students came in the top nine in maths, science and problem solving, and finished 13th in reading.

The trend is positive. Switzerland has been able to maintain its strong position in maths, which was the focus of the 2003 study.

The Swiss scored 527 points in this category. Even though this was two points less than three years ago, it was clearly above the average of 500.

This put the 15-year-old Swiss students in ninth place, not counting Hong Kong and Macao which did not take part in the first study.

In science, the Swiss made an impressive jump from 18th to ninth position. They improved their science score from 496 to 513 points.

The Pisa results from 2000 revealed that a fifth of Switzerland’s youth could at best read a simple text by the end of their studies, which led to a heated debate on the issue across the country.

Swiss students scored slightly better this time with 499 points compared to 494 in 2000. It was good enough to move from 17th to 11th place.

They proved to be among the top ten however when it comes to problem solving, ranking 8th with 521 points.

Once again, Finland and South Korea led the rankings in each of the four categories.

The Netherlands also got high marks, which comes somewhat as a surprise since it did not provide sufficient test results three years ago in order to be included in the rankings.

That was the fate of Britain this year.

Switzerland topped the list among German-speaking nations, with Swiss school board officials expressing their satisfaction.

But news of the poor results for Austria has already started a heated debate on education in that country, while first reactions from Germany on its slightly improved grade have been reserved.

Even with only a limited improvement in reading skills, Swiss students are moving in the right direction.

The findings are not shocking this time around, and there has been a great advance in the science category.

There was little time for effective reform of the country’s school system since only 18 months separated the assessment of the first study in 2000 and the start of the new test.

Teachers were however able to introduce more practical problem-solving elements into the classroom, similar to those used to test students in the Pisa study.

A real reform of the system will not be possible before the completion of the third Pisa study in 2007, when unified standards will be introduced nationwide.

swissinfo, based on an interview previously published by NZZ

Switzerland came seventh in math, 11th in reading, ninth in science and eighth in problem-solving.

Finland finished top of the list in the first three and second in the last category.

South Korea also finished in the top three in math, reading and science.

The English-speaking countries, Canada, New Zealand and Australia, finished in the top ten in all four, while the United States best finish was in reading where it came 15th. 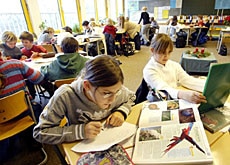 Standards of education in Swiss primary schools are to be harmonised within the next three years under plans unveiled on Thursday. The proposals ... 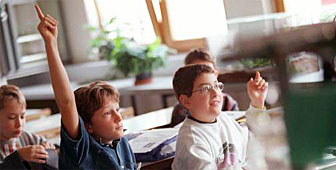 Children in Swiss schools have only average reading skills compared with those in other developed countries, a new study shows. The Swiss ... 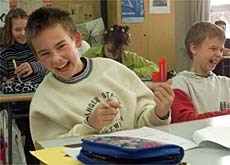 To improve poor literacy among pupils, Switzerland should abandon its policy of separating children according to their academic ability. That was ...