A major art museum opening this weekend in Switzerland’s fourth-largest city is the first step in a vast project rethinking art’s role in a fast-moving world. Organisers hope its location near one of the country’s busiest travel hubs will put it in the path of people who may never have set foot in a museum but pop in on their way to somewhere else.

The Cantonal fine arts museum (MCBA)external link opens to the public in its new location on October 5, almost 30 years after the official launch of the project. It used to be housed in the cramped Rumine Palace, a space it shared with museums for archaeology and history, money, geology and zoology. A 1991 decision to move it to a standalone building – an idea already proposed in 1924 – was met with fierce opposition and plans for a spectacular lakeside design were jettisoned by popular referendum in 2008external link.

Canton Vaud didn’t give up and put 11 other locations on the drawing board. One immediately stood out. A disused locomotive hall adjoining the Lausanne train station had become available, and the 25,000 square metres were enough to accommodate the photography and design museums as well, both housed in heritage, but impractical buildings.

The new project was revolutionary: rather than take people to museums, the museums would come to the people. Instead of an isolated cultural island, an entire zone around Lausanne’s train station was redeveloped to serve as a transit area for the ever-increasing number of train passengers. The concept of a “cultural platform” (the station’s 10th platform, or “Plateforme 10”) was born, with the fine arts museum leading the way.

Wise to the perils of another popular defeat, the authorities embarked on a campaign to win over the public and worked closely with Bernard Fibicher, the director of MCBA, to encourage a more involvement from the local population. They organised numerous visits for the public and a landmark exhibition, Balthus unfinished by Robert Wilsonexternal link, that took place in the building’s unfinished basement one year before the official opening.

Fibicher believes today’s museum was worth the wait and the work.

“It is a very elegant, beautiful, powerful building, and at the same time it’s functional,” he says. He believes that the young architects from Barcelona’s Estudio Barozzi Veigaexternal link, who were only 35 when the project started, contributed to the spirit of collaboration. They came up with a remarkably sober design that conserves the memory of the locomotive shed.

This short video shows how the MCB-A was constructed, preserving the locomotive hall’s original frontage that has become the 17.5-metre-high entrance hall.

Moreover, the tensions due to public planning delays helped build the museum’s collection, according to its director. Fibicher says that over the years, potential donors announced that if the museum ever happened, they would donate important works.

They kept their word and many of those works are included in the first exhibition, including a rare painting of the Nile by Paul Klee.

Perhaps the most spectacular donated work is the 14.5-metre-high tree by Giuseppe Penone that adorns that entrance hall, a gift from Lausanne art gallery owner Alice Pauli.

The museum’s inaugural exhibition, Atlas. A Cartography of Donationexternal link, includes the donated works and will be free for visitors. Fibicher, who curated the show, seeks to make even the most contemporary art accessible. In the case of the “Atlas” exhibition, he does this by telling stories: 400 works, many on view for the first time, have been woven into 11 themes such as forests, tenderness, pain, flows, music, etc. that tease the visitors’ appreciation and enjoyment.

But don’t expect blockbuster exhibitions at Lausanne’s new museum, he warns: they are the fare of wealthy foundations like Beyeler and Louis Vuitton, that can afford them. Public institutions simply don’t have the funds. But he thinks the museum’s nevertheless ambitious programme will allow it to vie for a place in the international big league, starting in February 2020 with  Under the Skinexternal link. Vienna 1900, from Klimt to Schiele and Kokoschka. That exhibit will offer a new perspective on the role of Viennese artists in the genesis of modern art.

The second building to join the “Plateforme 10” cultural district, which will jointly house the Elysée museum of photographyexternal link and the Museum of design and contemporary arts external link (mudac), is due to be completed in autumn 2021. Could visitors be overwhelmed by so much culture at one location? Tatyana Franck, the Elysée director, doesn’t think so, and believes the single location offers other advantages.

“The relocation of three museums to a single site diminishes our ecological impact. We can no longer ignore the importance of this issue. Furthermore, we’re expecting most of our visitors to come by train, which will reduce our carbon footprint.”

She also points to opportunities for joint thematic exhibitions.. Additionally, a common pool of digitalised artworks will allow visitors to compose their own virtual shows with works from each museum, thanks to a pioneering 3D technology by Lausanne-based startup Artmynexternal link.

Plateforme 10, Frank claims, is the first cultural hub to unite fine arts, photography and design and to plan such collaborations from the very start.

The MCBA in figures:

- 10,000 works in its holdings from the second half of the 18th century to today, including the world’s largest collection of works by Felix Vallotton

- Free entrance to the entire museum, except for the temporary exhibitions

- 8 to 10 exhibitions a year, from classical to contemporary art.

The MCBA will be joined within two years by the Elysée museum of photography and the Museum of design and contemporary arts  (mudac), making PLATEFORM 10  (the combined name) the first cultural platform next door to a major transportation hub still in operation. By 2030, the Lausanne train station’s radical rehaul will boost the number of daily passengers to 200,000 from the current 120,000.

The beginning of gentrification

Wherever museums go, galleries follow. Leading the way is Fabienne Levyexternal link whose gallery opened one week ahead of the MCB-A. In the ethnically hybrid neighbourhood surrounding the Lausanne station, her gallery signals a move towards gentrification. The inaugural exhibition, Elevation, is a museum-quality solo show by the Mexico-based Italian artist, Andrea Galvani, who queries science to produce powerful works of mixed-media art (until 23 November).

The Vaud government has decided unanimously to house the new cantonal fine arts museum in a huge Swiss Railways train depot in Lausanne. ... 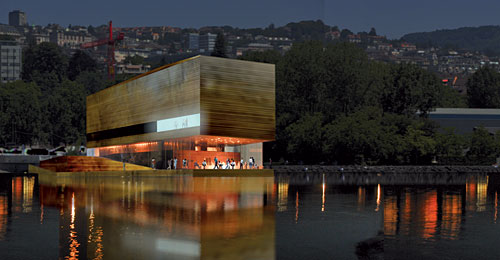 A new cultural institution dedicated to contemporary art has opened its doors to the public in the Engadine valley in southeastern Switzerland.