While current rules make transgender people ineligible for military service, the army is mulling over the possibility of lifting restrictions in the future.

According to the Le Matin Dimanche and SonntagsZeitung papers, the military has set up a "Diversity Swiss Army" office to deal with the subject of transgender people. Current army regulations render transsexuals ineligible for military service and civil protection duties. In practice, the military has made exceptions on a case by case basis.

If a specialist certifies mental and physical health of the individual and their ability to meet criteria like stress resistance, resilience, adaptability and subordination, there is nothing to prevent a transgender person from being admitted. Such cases are quite rare. Military doctors identify approximately 18 transsexuals per year.

A recent study by the Zurich Federal Institute of Technology (ETHZ) called "Security 2019" notes resistance by the public to the idea, even when it comes to homosexuals. In a survey, 14% believe that sexual minorities could affect troop cohesion. A government-led survey on social networks addressing 53,000 male and female conscripts is planned as early as 2020.

In the future, army recruiters will address the transgender issue by asking 19-year-old recruits about the sex they identify with. They will be able to check the box called "other" besides the usual "man or woman".

The Swiss Federal Court ruled today that the law on equality does not apply to discrimination on the basis of sexual orientation.

swissinfo.ch spends a day with Zoé Frei, one of the few female soldiers in the Swiss military. 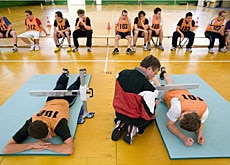 Every able-bodied Swiss male traditionally serves in the country's armed forces after passing through the recruitment process aimed at determining ...

A former Swiss army officer who fought in a Christian militia against Islamic State in Syria has been given a suspended sentence and small fine by ...

Getting in shape App to help Swiss army recruits get fit

Having fit soldiers is important for the Swiss army – it means fewer injuries and fewer people dropping out.