Top ten-ranked Swiss tennis player Stanislas Wawrinka has crashed out of the French Open, losing to 24th seed Chilean Fernando Gonzalez in the third round.

Hopes had been high for Wawrinka, who had first-rate results at the start of the year, including being in the final of the Rome Masters, where he was beaten by third-ranked Novak Djokovic.

Wawrinka entered the top ten earlier this month – the second Swiss after world number one Roger Federer - and is currently ranked ninth.

Switzerland is now only the third country with two tennis players in the male top ten, after Spain and the United States.

Wawrinka had a good start to the match, but was unable to sustain momentum.

"I really set a trap for myself," said the Swiss. "I played well until the start of the third set... but I didn't do what was necessary to finish it off."

"By 3-0 I started to hesitate about what to do, [Gonzalez] started to play better and I lost track of the match."

Wawrinka said that afterwards he found it hard to get back into the game. "I had what it takes to beat him but I didn't manage to do it," he said.

There had been signs that Wawrinka – only the fourth Swiss man to enter the tennis top ten rankings after Jakob Hlasek, Marc Rosset and Federer – was slowly emerging from Federer's shadow.

But Saturday's result puts paid to any ideas of a "dream" Swiss quarterfinal, where Wawrinka might have faced the world number one.

Federer beat the Croatian Mario Ancic in three sets on Saturday to reach the fourth round. The French Open is the only Grand Slam tournament to so far elude him.

In the ladies' competition, Patty Schnyder also went through to the quarter finals for Switzerland.

However, "Stan", as he is known, remains philosophical about his defeat in Paris. "If I can get something positive out of it, this match could be very helpful for what's still to come," he said.

He made his professional debut in 2003, did battle for the time in the Davis Cup in 2004 and took home his first tournament title in 2006.

After a knee injury in February 2007, he returned and reached two finals during tournaments in Stuttgart and Venice. Since the start of the 2008 he has continued making progress, winning two finals, and figures today among the ten best players in the world.

Swiss in the top ten

Stanislas Wawrinka is the fourth Swiss in history to be projected into the top ten.

Roger Federer entered the top ten for the first time on May 20, 2002 at 8th place. He stayed ther for several weeks before exiting. He returned definitively to the top ten on October 14, 2002, where he has remained ever since. All eyes on Wawrinka as French Open nears

First-rate results from the start of the year have projected Stanislas Wawrinka to the tenth men's world ranking in tennis. It's a feat only ever ... 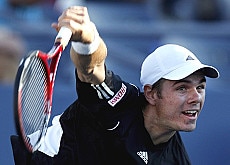 Wawrinka joins Federer in last 16 of US Open

Switzerland’s Stanislas Wawrinka has beaten Robby Ginepri of the United States to earn a place in the last 16 of the US Open tennis tournament ... 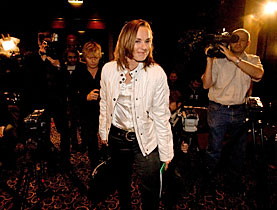 Switzerland's former world number one tennis player, Martina Hingis, has been served a two-year suspension after testing positive to cocaine at ...