Swiss Islamic scholar Tariq Ramadan has been accused of sexual abuse and misconduct by four anonymous women in Geneva. He denies any wrongdoing and has launched defamation charges.

The latest allegations were reported by the Tribune de Genève newspaper, which published over the weekend an investigative article about Ramadan's time teaching French and philosophy in Geneva from 1984 to 2004.

Four women, two of whom were under the age of 16 at the time, told the newspaper that Ramadan had either "psychologically manipulated" or abused them.

Ramadan, in a message on his Twitter page, said: "I categorically deny all of these allegations and am today filing a suit against X for libel."

The Swiss allegations come less than a week after Le Monde and Le Parisien newspapers, in France, reportedexternal link that a woman had filed a complaint against Ramadan, 55, for an alleged rape in 2009. Another woman had alleged on October 20 she was also assaulted by Ramadan in 2012.

Paris prosecutors said they had opened a rape and sexual assault investigation against Ramadan following the first complaint. Ramadan’s lawyer, Yassine Bouzrou, has denied the accusations and says his client is suing for “slanderous allegations”.

It was also reportedexternal link last week that a Belgian woman was accusing Ramadan of sexual violence.

On Tuesday, the University of Oxford, where Ramadan has been a professor of Contemporary Islamic Studies since 2009, announced that Ramadan would take a leave of absence “by mutual agreement, and with immediate effect”.

“The University has consistently acknowledged the gravity of the allegations against Professor Ramadan, while emphasising the importance of fairness and the principles of justice and due process,” the university said in a statementexternal link.

“An agreed leave of absence implies no presumption or acceptance of guilt and allows Professor Ramadan to address the extremely serious allegations made against him, all of which he categorically denies, while meeting our principal concern – addressing heightened and understandable distress, and putting first the wellbeing of our students and staff.”

In Switzerland, Ramadan, grandson of Hassan Al-Banna, founder of the Muslim Brotherhood, still has the support of national Islamic associations. In the French-speaking part of the country, surprise and incomprehension were the dominant reactions.

“Personally, the disappointment – if all this turns out to be true – would be so great that I really struggle to believe it,” Pascal Gemperli, president of UVAMexternal link, the union of Muslim associations in canton Vaud, told Swiss public radio, RTSexternal link.

The recent expulsion of Swiss Imam Hani Ramadan from France is a reminder that Switzerland is home to several controversial Muslims.

“I know he’s heavily criticised in some circles, but I’m telling you honestly that I can’t believe it. Everything I’ve read about him in recent years has been in favour of integration, in favour of a positive contribution to society, to do good, to convey love. And I think from a religious point of view, he’s a big resource for many people in Europe.”

Born in Geneva in 1962 and the younger brother of controversial imam Hani Ramadan, Tariq Ramadan studied Islamic Studies and French literature at the University of Geneva. He acquired Swiss citizenship at age 22.

In 1986, he married a French Catholic who converted to Islam. The couple and their first three children spent time in Egypt while he finished his religious training. Upon his return to Switzerland in 1992, Ramadan began to make a name for himself in France with a series of conferences and television appearances.

The telegenic, charming, eloquent and knowledgeable figure became the voice of the “European Muslim”, the title of one of his many books, which calls on other Muslims to shake off the mentality of minorities and victims and to stake their claim as full citizens who are faithful to the principles of Islam.

His audience ranges from second-generation immigrants in the suburbs to intellectuals, especially on the left and among those opposed to globalisation.

However, many critics argue that beneath the charm of the “Egyptian prince” lurks a dangerous Islamist. Ramadan’s fortunes changed in 2003 when he wrote a column online which two major newspapers refused to run. The column listed a series of Jewish intellectuals who, according to Ramadan, were too complacent about Israel. The following year, the United States denied him entry, although he had been offered a position as a professor at a Catholic university.

He later moved to Britain and in 2009 was given a Chair of Islamic Studies at Oxford, financed by Qatar. In early 2016, Ramadan announced his intention to apply for French citizenship, but this was vehemently opposed by then Prime Minister Manuel Valls.

Hani Ramadan, the controversial former director of the Geneva Islamic Centre was expelled from France on Saturday for posing a serious threat to ...

Ramadan speaks in US on Muslim issues

Tariq Ramadan, a Swiss Muslim professor barred from entering the United States under the Bush administration, has appeared publicly in New York ... 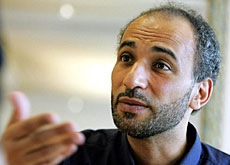 Five years after the September 11 attacks, a leading Swiss expert on Islam says trust between Muslims and the West is at rock bottom. In an ...