Two hundred prisoners at Switzerland's most overcrowded jail are threatening to go on hunger strike over alleged police brutality and slow justice.

Human rights campaigners, who have visited inmates at Champ-Dollon prison in Geneva, describe the situation as "potentially explosive".

"The prison is so overcrowded at the moment that even the smallest problem could turn out badly," said Doris Leuenberger, vice-president of the Swiss Human Rights League (SHRL).

The Geneva lawyer was part of a four-strong team that met a delegation of seven prisoners at the jail on Monday. The visit came in response to a petition signed by 200 inmates sent to the Geneva authorities earlier this year, outlining a list of complaints.

They include allegations of excessive use of force against suspects held in police custody, a practice that an independent police watchdog in the city says is "widespread".

Another grievance is the painfully slow legal process, which means suspects spend months in Champ-Dollon before being brought to trial.

Leuenberger cited one example where a prisoner spent eight months in preventive custody only to receive a two-month sentence when his case finally came to trial.

The SHRL wants the canton to set up a special court for dealing with suspects caught in the act of committing crimes to speed up the legal process.

"There will be major trouble at the prison if this situation is not resolved," Leuenberger warned. "The hunger strike threat is on the table and much depends on what action the authorities take."

Champ-Dollon, which is notorious for being the country's most overcrowded prison, currently contains 485 prisoners. Its normal capacity is set at 270.

Last month the authorities announced plans to build a new block at a cost of around SFr10 million ($7.68 million) on land adjacent to the prison, with room for 64 inmates.

"The problem of overcrowding means that normal conditions cannot be respected. One of the regular complaints we get is lack of access to medical care," Damien Scalia, a member of the SHRL's prisons committee, told swissinfo.

Constantin Franziskakis, director of canton Geneva's prison service, admitted that the situation inside the jail was "very difficult" because of overcrowding. But he said he hoped the new block would ease the situation.

Geneva's justice and police department was unavailable for comment on the complaints set out in the prisoners' petition.

According to the Federal Statistics Office:

The Swiss prison population topped 6,000 for the first time last year.
This represented a 15% increase on the previous year.
Of the 122 detention centres, around 40 were full and nine were overcrowded.
Champ-Dollon had the highest average occupancy rate – 162% or 438 inmates for 270 places.
Foreigners make up more than half the prison population.

Jamming equipment is being installed at three Swiss prisons for a trial period to stop inmates making phone calls from their cells using smuggled ... 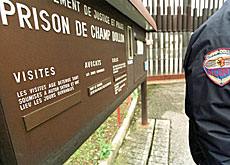 The justice ministry is warning of a possible crisis in crowded Swiss jails, saying there is no relief in sight. It comes after prison guards in ...