Did Ötzi have Swiss relatives? New information has emerged this week about an archaeological discovery in Switzerland that points to significant links between areas north and south of the Alps 5,000 years ago.

For years, archaeologists have been studying a copper axe blade found at the pile dwelling site of Riedmatt, in canton Zug in 2008. It was probably placed in the water as a sacrificial offering about 5,000 years ago.

This week, following research at the University of Bern, surprising results were announced: the shape and material of the blade (see photo) are practically identical to those that were used by Neolithic peoples further south – including Ötzi, the 5,000-year-old “iceman” pulled out of the Italian alps in 1991.

What this means, the researchers said, is that contrary to previous assumptions, the use of copper north of the Alps 5,000 years ago was strongly linked to and influenced by the practices further south.

Indeed, they now assume that the Riedmatt blade actually travelled north from southern Tuscany, just like the one found with the mummified skeleton of Ötzi, on the Italian-Austrian border.

The commonalities between the two blades found by chemical analysis suggests that both belong to a similar context of copper mining and processing in the ore rich area around Campiglia Marittima, in Tuscany.

Links, both cultural and economic, between the regions north and south of the Alps during the Neolithic period (which ended around 2000 BC) were up to now rather “incoherent or undervalued,” noted the Zug media release. With this finding, some important gaps in research around pile constructions of the time may be breached.

Details of another archaeological find were announced on Tuesday near Bern, this time from some thousand years later and some 150 kilometres south-west. A trove of equipment was pulled from a glacier, including fragments of bows and tips of arrows, a wooden box containing flour, small pieces of leather, and a container made from cow-horn.

Bernese archaeologists said that the remains probably amount to the equipment of a Bronze age mountaineer, who would have been crossing from canton Valais to canton Bern via the Lötschen pass, for centuries an important north-south travel route.

Though not quite as old as Ötzi, or those found in Riedmatt, the objects date back to somewhere between 2000 and 1800 BC, meaning that they are the oldest ever found on this particular Swiss route.

The find was first reported in 2011 by the hut-keeper of the Lötschen pass, and was made possible due to the increasing melting of glaciers, which also yielded the grim find of a pair of Second World War-era walkers earlier this year.

Prehistoric farming 7,000 years ago, on a Swiss Alp

People in Switzerland were running high alpine pastures much earlier than previously assumed, according to a study that combines archeological ... 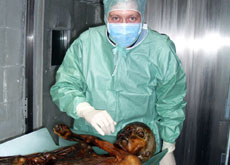 A Swiss woman whose parents went missing 75 years ago says she is very relieved that their bodies have been found. (SRF/swissinfo.ch)