Although we always had plenty of work to do, my time as Germany’s ambassador in Switzerland feels in retrospect like one big party. A love letter to Switzerland…

I have had the great fortune to spend the last four years of my working life in beautiful Switzerland. Compared to the trials and tribulations of Europe and the rest of the world, the Swiss still live on an Isle of the Blessed. Such a degree of political stability, civic spirit, economic prosperity and social harmony has to be unique.

At the outset of my career I daresay I would have preferred a more exotic posting. But Switzerland is really a bit more exotic than people think. That goes not just for the multicultural character of the country, but for the distinctive cultural events within each language area. Think of the Basel carnival; St Alban’s festival in Winterthur; Zibelemärit, the onion market in Bern; Sechseläuten, the Spring holiday in Zürich, Bochselnacht, the pre-Christmas parade in Weinfelden, or the Fête des Vignerons in Vevey – the cultural diversity is as inexhaustible as it is full of life. Going hand in hand with this is of course the tremendous linguistic variation from Basel or Freiburg to Valais German and to patois.

Anyone coming from further north, who thinks that Switzerland is just an extension of Germany, hasn’t understood Switzerland at all.

Emerging within a few generations from bitter poverty to sustained prosperity by dint of hard work, creativity, discipline, solidarity and a small amount of support from outside, and after centuries of bloody conflict being able to establish a functioning “nation by choice” through a more or less fair regional balance of interests, decentralised organisation, subsidiarity and efficient administration – these are just two of the important narratives to explain the unprecedented success of Swiss society.

Naturally the highly successful model of direct democracy plays a key role. In the last four years I have become a big fan of it. In Germany it tends to be considered just as a system for holding plebiscites. This overlooks the fact that – in spite of all the criticism it gets – it also dovetails with the well-functioning system of part-time parliamentarians and with the continuity of the executive, which can continue even past elections. Anyone who does good work for the country may stay in government for 10 or 15 years; this is a kind of grass-roots meritocracy, which unites the main political parties and their members in a consensus-oriented system of checks and balances.

What successful country in the world is run by seven ministers? I know countries which do not produce even a fifth of Switzerland’s GDP and manage to have 25 ministers – not to mention hordes of deputy ministers and other assorted worthies. In this country there are no synergies lost through bruising election campaigns and complicated coalition negotiations.

In Switzerland people tend to be modest. They do not like to showcase their own achievements. But to complete the picture it needs to be said that Switzerland is not just an economic and social success model. With the highest number of humanitarian organisations worldwide, with the International Committee of the Red Cross, with successful mediation projects, with international humanitarian law as developed in Switzerland, with its long-term protecting power mandates and its worldwide reputation as an objective, neutral go-between, Switzerland is a humanitarian superpower.

One thing I find particularly admirable is the relative unobtrusiveness of the federal level in Swiss society as compared to other countries. You could call it ‘federal government lite’. This is reflected in the decidedly unpretentious image of Swiss politicians compared to their counterparts elsewhere. No huge staff of aides, no flashy limousines, no overbearing bodyguards. Parliamentarians and ministers from all parties are usually not at all stuck-up and can be talked to anytime. Their mobile phone numbers are right there on their business cards, and they don’t take long to get on first-name terms.

The same goes for my colleagues in the Swiss Foreign Ministry: I found them for the most part friendly, modest, and highly skilled. And in spite of all the complaints about increasing bureaucracy, the high level of efficiency in political life and administration is impressive. If there are complaints, the standard is pretty high. In what other country in the world is there a public debate about whether ministers should have free parking in front of their ministry? It can happen in Bern that when shopping in the Migros supermarket you find yourself standing in the checkout queue with the nation’s president. And no-one makes a big deal of it. This too is a sign of emancipated citizenship. It adds up to a low-key, efficient system, a best-practice benchmark for mature democracies in our post-industrial world.

And then there is the pillar that supports everything else: a referendum system in which «dēmos» (the people) and «kratós» (the state) are hooked up more convincingly than in any other democracy known to me. There have been over 300 popular votes in just 170 years. (And that is just at federal level.) The study of the dossiers for all the issues to be voted on could amount to a part-time job. Voting several times a year at all levels of government on all sort of issues makes mature citizens into sovereign decision-makers.

It also gets the people working together with the Executive. Despite all the criticism I have heard recently, when Swiss voters go to the polls it’s not just to let off steam against the powers-that-be. They keep in view not only their own interest but often the national interest, and use their vote carefully. The people gets the last word.

German visitors tend to be dumbfounded when I tell them that the Swiss have voted down an extra week’s holidays, a minimum wage, and the “1:12 Initiative” to limit executive pay. Here people still have a rational macro-economic gut feeling. I hope it remains so.

Relations between Switzerland and the EU have been a hot topic in recent years – the Union is not much in vogue in Switzerland. In public opinion there are as many negative clichés going around about the Brussels juggernaut as in many an EU member state. The inclination to join a club of mostly poorer relations is not very strong either. The mass immigration initiative was often the elephant in the room in meetings with Swiss partners, and it took up the energies of the representatives of the EU member states accredited in Bern to a varying extent. Thanks to the “domestic preference (lite)” proposed by the Swiss government a way could be found out of the dilemma between the constitutional wording and the continuation of the bilateral agreements.

It is to be hoped that a way can be found too to harmonise the Swiss bilateral agreements with the European Union’s legal framework, the “Acquis communautaire”. Here the Swiss understandably have expectations of their next-door neighbours, Germany in particular. As for the debate on “foreign judges” I have never really been able to understand it, being a lawyer myself. Do we ever really have “our own judges”?

It has been, at any rate, a great privilege to live and work in Switzerland. I will miss some things a great deal – skiing in the Bernese Oberland, the picture postcard landscapes, three kisses as a greeting, the view of Bern’s Gurten mountain, the wonderful garden, swimming in the Aare, and yes, the local German dialect. Some things we won’t miss: the prices, traffic jams on the A1, radar traps – and Zurich’s “NZZ” newspaper (because you can get it in Berlin too!).


Translated from German by Terence MacNamee

German investigators believe a mole spied for the Swiss intelligence service inside a German tax office, which was trying to catch German tax dodgers. 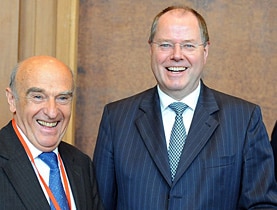 Switzerland and Germany bury the hatchet

The Swiss finance minister and his German counterpart appear to have smoked a pipe of peace to end months of spats over Swiss banking secrecy. ...