In an exclusive interview with swissinfo.ch, the Swiss lawyer said she was torn between concern and satisfaction at the idea that these “heinous acts” would soon be brought to justice.

Del Ponte, now Switzerland’s ambassador to Argentina and due to retire early next year, was Prosecutor of the International Criminal Tribunal for the former Yugoslavia (ICTY) from 1999 to 2007.

In 2008 she published a controversial book, The Hunt, in which she detailed evidence of the smuggling of organs taken from murdered Serb civilians after the end of the Kosovo war in 1999.

The ICTY said it had never seen evidence to substantiate her claims, and Thaci and the Albanian prime minister Sali Berisha publicly rejected them.

The Council of Europe report, drawn up by Swiss senator Dick Marty, who is to present it officially to European diplomats on Thursday, says Thaci headed a “mafia-like” organisation that dealt in weapons, drugs and human organs.

It says the Kosovo Liberation Army (KLA), which Thaci led, had secret prisons where  Serbs and Kosovar Albanians were held in inhuman conditions, before being murdered for their organs.

“The information revealed in The Hunt led to this investigation,” Del Ponte told swissinfo.ch in an exclusive interview.

She said in the interview she was “shocked and deeply distressed” by the findings – “namely that the killing of prisoners with the express purpose of removing their organs and selling them for profit was carried out by senior members of the KLA, including some individuals who hold top positions in the country’s current government”.

She said the claims in her book were backed by “credible and verifiable physical evidence“ obtained by researchers from the ICTY and the United Nations Mission in Kosovo (Unmik) during a mission to Albania and in the presence of an Albanian government prosecutor.

“The reason I included these claims in my book was to provoke a serious follow-up, so that, if the findings warranted it, a criminal investigation would be launched,” she explained.

“Such a criminal investigation could not have been carried out by the ICTY because it had no jurisdiction in this matter. But Unmik and the local authorities in Kosovo and the Republic of Albania did have such jurisdiction, and also had the authority to undertake this,” she said.

“I know the reports cited in The Hunt led to an investigation by the Council of Europe, a draft of which was published on its website in March.”

Marty to be sued

Del Ponte said she was glad the Council had taken over the investigation, describing it as the “only credible one ever carried out by any competent body, either local or international”.

“Neither the Kosovo authorities nor the government or judiciary of the Republic of Albania have carried out any investigation into the statements in my book, and have now just dismissed the serious accusations contained in the Council of Europe report,” she told swissinfo.ch.

Indeed, on Thursday a senior Kosovo official, who spoke on condition of anonymity because of the sensitivity of the matter, said Thaci had contacted attorneys to pursue a libel suit against Marty. The official said Thaci was also considering suing the London-based Guardian newspaper, which first published the report.

“So I beg the European Union, the United States, other interested countries and the United Nations to give Eulex [the EU police and justice mission] every political and material support to conduct a criminal investigation into these accusations and to bring to trial all those suspected of involvement in these crimes,” she said.

“Furthermore, I beg them all to redouble their efforts to build up and implement the necessary capacities for law enforcement and the eradication of illegal organ trafficking, in particular the harvesting of a person’s organs against their will.”

Del Ponte has no doubt that the world needs a better system to ensure a supply of healthy organs for transplantation, but thinks the depravity of killing innocent people for their organs makes it hard for many people to believe that it actually happens.

“Let us hope the accusations made by the Council of Europe will be heard as a cry that will make the international community do what is needed to solve this problem.”

Carla Del Ponte was born in 1947 in Bignasco, in the southern Swiss canton of Ticino.

She studied international law in Bern, Geneva and Britain.

In 1981 she became Ticino's chief prosecutor, where she became well known for her fight against money laundering, organised crime and gun running.

Del Ponte was Swiss federal prosecutor from 1994-9, to a mixed reception, with some accusing her of "activism".

In 1999 the then UN Secretary-General Kofi Annan appointed her chief prosecutor at the International Criminal Tribunal for the Former Yugoslavia. She left this post at the end of 2007.

In January 2008 she took up her new job as Swiss ambassador to Argentina.

The ICTY was established by Resolution 827 of the UN Security Council in May 1993.

Based in The Hague, it is the first international body for the prosecution of war crimes since the Nuremberg and Tokyo trials held after the Second World War.

The tribunal has jurisdiction over individuals responsible for genocide, war crimes and crimes against humanity in the territory of former Yugoslavia after January 1, 1991. 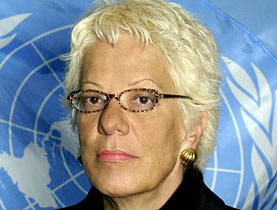 "I have learned a lot about the horrors of war"

Carla Del Ponte tells swissinfo about the ups and downs of her time as chief prosecutor of the International Criminal Tribunal for the Former ... 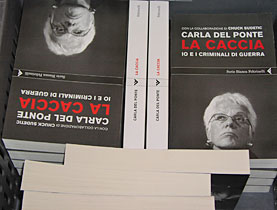 A book by Switzerland's ambassador to Argentina, Carla Del Ponte, on her time prosecuting war criminals has caused controversy both in Switzerland ...

A draft report by the Council of Europe says Kosovo Prime Minister Hashim Thaci was the head of a “mafia-like” network that dealt weapons, drugs ...

Return to Kosovo Struggling for a living under corruption

Since the 1990s Albanians have been among the largest groups of foreigners in Switzerland. Most of them came from Kosovo, leaving their country ...