Chillon Castle on Lake Geneva is one of the most impressive and most visited medieval castles in Europe, but its managers are now worried about its upkeep. (SRF/swissinfo.ch)

Last year, it attracted over 400,000 tourists, a record number. Now the municipality of Veytaux has raised taxes on ticket sales by 40%, increasing the castle's tax burden by CHF100,000 ($107,000) per year. Veytaux says it is in dire financial straits and has no choice but to raise taxes.

The castle will now pay more than CHF250,000 in ticket taxes per year: more than they receive from the canton for the upkeep of the castle. Managers are wondering whether they will still be able to afford the constant renovations necessary to maintain such a large historic building.

The rock island on which the castle was built has been inhabited since prehistoric times. It was both a natural protection and a strategic location to control the passage between northern and southern Europe. It was a profitable toll station for the counts of Savoy from the 12th to the 16th centuries, then the inhabitants of Bern conquered the water castle, and subsequently the inhabitants of Vaud prevailed.

The castle was the focus of many 19th-century writers from the romantic era, including Percy Bysshe Shelley, Alexandre Dumas, Victor Hugo and Jean-Jacques Rousseau. However, the castle was made famous by Lord Byron’s poem, “The Prisoner of Chillon”, written in 1816. The castle is also one of the settings in Henry James's novella Daisy Miller (1878) and the castle in the Little Mermaid film (1989).

Dungeons and dragons How to run a castle as a business

Knights and dragons on the iPad or in a real castle? Competition from today’s digital world is fierce as Swiss castles try to attract more visitors.

The summer of 1816 Following in Lord Byron’s Swiss footsteps

Two hundred years ago, Lord Byron retreated to Switzerland with fellow Romantics for what would become an exceptionally creative summer.

One thousand bottles of wine were submerged on Saturday, where it is hoped they will age nicely in the ideal conditions provided by the lake’s depths. 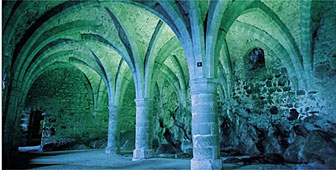 The "Prisoner of Chillon" lives on

Chillon near Montreux is one of the best-known castles in Europe. Situated on a rocky islet just off Lake Geneva's shore, it has for centuries ...