The city is celebrating the 100th birthday of the imposing stone Reformation Wall in Geneva, which features huge statues of leading Protestant Reformation figures such as John Calvin and John Knox. An exhibition at the Maison Tavel museum in Geneva is showing archive material about the wall.

The Reformation Wall is located in Geneva’s Bastions Park close to the Old Town. The monument features major figures of the Reformation in the 16th century – John Calvin, William Farel, Théodore de Bèze and John Knox. The motto of Geneva, “Post Tenebras Lux” (After darkness, light), which belongs to Calvinist philosophy, is also engraved on the stone wall.

French artists Paul Landowski and Henri Bouchard designed the monument. It was built following a long public debate about its location and form, and the first stone was laid in 1909.

Despite being two years late, the wall was generally well received by the Geneva population when it was inaugurated. It is now a popular tourist site in the western Swiss city. Every first Sunday of November, the Reformation is celebrated at the monument site.

For Swiss Protestants, the 500th anniversary of the Reformation is an occasion to reflect on their own identity.

The time: March 9, 1522, the first Sunday of Lent. The crime scene: a printer’s workshop in Grabengasse, Zurich. 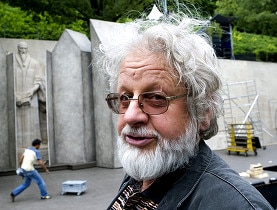 As part of the 500-year celebrations of the birth of Protestant reformer John Calvin, Geneva is staging an open-air play about the controversial ...

On the occasion of his 500th birthday, the city of Geneva is staging a special open-air play on the Protestant reformer John Calvin. swissinfo ...