It was 30 years ago that the first campaign was launched in Switzerland to inform the public about a new illness that was making the headlines: Aids. (SRF/swissinfo.chexternal link)

At the time, a street survey conducted by Swiss public television showed how little people knew about the immune deficiency syndrome: some thought it was caused by environmental pollution; others thought you could catch it by kissing.

The Aids campaign launched in Switzerland in 1987 was unique in Europe in that rather than making people afraid, it sought to explain how people could protect themselves. The boldness of this and subsequent campaigns launched by the Federal Office of Public Health shocked the public initially with their overt sexual references, but people gradually became used to seeing posters of condoms.

There are currently around 20,000 people in Switzerland living with HIV. Worldwide, the figure is 36.7 million (2015 figures: UNAIDS)

Erasing the stigma of HIV/Aids at work

Around seventy per cent of Swiss people suffering from HIV/Aids are employed, many in full-time positions, but discrimination at work is still a ... 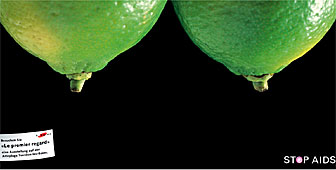 Sexually suggestive posters of fruit, vegetables and shells have appeared all over Switzerland as part of a new Aids prevention campaign. The ...

25 years ago the Swiss government launched its first campaign to counter the growing number of Aids cases in the country. Over the years, the ...