It could be said that Prince William and Kate Middleton cemented their love in Switzerland.

After all, the couple’s first public kiss was snapped by British tabloids in 2006 in Switzerland on the slopes at Klosters, where the British royal family have been spending Easter holidays for some 40 years.

Switzerland and Britain share a love of tradition and history, in addition to having strong business and sporting ties – it was the British who were the first tourists to ski at St Moritz.

Some 2,000 Swiss companies are operating in Britain and bilateral trade between the two countries reached a record £13 billion (SFr18.91 billion) in 2010, managing director of the British-Swiss Chamber of Commerce Carolyn Helbling tells swissinfo.ch.

“The two countries are quite different but there is a mutual understanding and a mutual liking. Switzerland has some very strong traditions and is very proud of where it has come from and I think the UK is very much like that as well,” said Helbling.

As such, the Swiss are enthusiastically embracing all things British in the lead-up to the royal nuptials on April 29. A spokesperson for the British Embassy in Bern said it had received messages and cards from Swiss nationals wishing the couple well.

“Everybody knows about William and Kate. The Swiss papers and celebrity magazines are absolutely full of it,” said Helbling.

Michael Fontana-Jones, manager of the British Cheese Centre in Zurich tells swissinfo.ch his Swiss customers are much more affected by royal wedding fever than their British counterparts.

“The Swiss are very interested in the royal wedding, much more so than my English customers. A lot of them are quite glad they’re not in the country and don’t have to go through it all,” said Fontana-Jones.

The British Cheese Centre, together with fellow British product stalls the Pie Shop and the Queen of Cakes, has planned a series of events around the royal wedding, including free tastings and a fancy dress party. Celebrations will culminate in the creation of a ten-tier wedding cake made entirely out of British cheese.

Fontana-Jones has even tracked down a life-size cardboard cut-out of William and Kate with which enthusiastic customers can have their photo taken.

“It’s very lifelike … we’ve done some test photographs and if you get the lighting done the right way it actually looks like you are really with the couple,” said Fontana-Jones.

“Originally we weren’t going to do anything but then all my Swiss customers – about 80 per cent of my customers are Swiss – many of them were asking what we were doing to celebrate the royal wedding. It was them who initiated it.”

“There is a lot of interest in William and Kate,” assistant manager Nick Schorp tells swissinfo.ch. “One of our best-sellers is a waving Queen doll that has a solar sensor and she just waves all day. It’s cute and funny and kitschy.”

He said that although the Swiss are interested, the event remains “a very big thing for the English” who have been given a public holiday for the occasion.

“I have colleagues who are just going crazy about it, wanting the day off as well,” Schorp said.

The level of enthusiasm from the Swiss seems to have come as something of a surprise for those caught up wedding fever.

Swiss beauty company Karin Herzog has seen its sales explode in several markets after it was revealed in November that Middleton has been using its products since she attended university.

The family-owned company, which has a limited distribution online and in beauty salons, booked 300 new Swiss customers in a single week, she said.

“It is really booming here,” said Palmisano-Herzog. “It’s incredible, we really didn’t expect it. I wouldn’t have thought that Swiss women would be such huge fans.”

A fancy dress party will take place in the Viaduct Markthalle in Zurich on the eve of the royal wedding on April 28. A large screen will broadcast the wedding live on April 29.

The British Residents Association (BRA) in Geneva will host a wedding lunch at Mr Pickwick’s pub in Geneva, which will broadcast the wedding live.

In Basel, BRA is hosting a formal lunch and live screening of the wedding at the Grosser Festsaal Basel, featuring live music, champagne and wedding cake.

December 2003. The couple unite, after having shared a student house together.

March 2004. The couple are pictured skiing at the Swiss resort of Klosters.

January 2006. British tabloids snap the couple’s first public kiss while they are holidaying at Klosters.

April 2007. The couple splits, but reunites some three months later.

April 2008. Kate in attendance as William receives his RAF wings from the Prince of Wales.

Switzerland is Britain’s third largest export market outside the EU, behind the United States and China but ahead of Brazil, India and Russia.

Some 2,000 Swiss companies are operating in Britain.

Britain supplies over $400 million (SFr358 million) of goods and services to the United Nations agencies in Geneva.

Britain is Switzerland’s fifth largest export market. The value of Swiss exports to the Britain in 2010 was £8.4 billion (SFr12.22 billion), an increase of 47 per cent compared with 2009.

A new law that requires foreign nationals have a valid visa before they can marry in Switzerland has been criticised as a breach of human rights. ...

A rare pink diamond has become the most expensive stone ever auctioned, selling in Geneva for SFr45.44 million ($45.72 million) - nearly twice the ...

From Bern to Berne for love

Deborah Tonini from Bern, Switzerland, cooks Italian and Swiss dishes for her guests in a restaurant in Berne, Indiana. She left the Swiss ...

By Rita Emch in Berne, Indiana 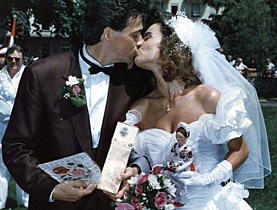 Romance is in the air and on Valentine's Day thoughts may well turn to marriage – an institution which is still in very good health in ...

A Bern five star hotel and a pub get the royal treatment. Top hats and canapés at the Bellevue or pub stools and nibbles at Mr Pickwicks?