The one-time prosecutor for the International Criminal Tribunal for the former Yugoslavia, Carla del Ponte, has been appointed to a United Nations commission investigating war crimes occurring in Syria during its 18-month-old civil war.

Del Ponte, who has also served as a Swiss ambassador and federal prosecutor, was named on Friday to serve on the commission alongside Vitit Muntarbhorn, a Thai expert and veteran UN investigator, American Karen Abuzayd and Brazilian Paulo Pinheiro.

The international inquiry, led by Pinheiro, was set up a year ago, and is gathering evidence for possible future trials of figures suspected of committing abuses in the war being fought between Syrian President Bashar al-Assad's military and the opposition forces.

The group has interviewed more than 1,100 victims, refugees and defectors thus far, but has been denied access to Syria.

On Friday the Council extended the mandate of the Syria inquiry by another six months and condemned violations by government forces and pro-Assad militias but also by rebel fighters.

The 47-member forum adopted a resolution by a vote of 41 states in favour, with three states - China, Cuba and Russia - against and three abstentions.

The appointment of del Ponte was seen as a strong sign of the UN's determination to bring human rights violators to justice. Del Ponte previously spent eight years at the Hague-based International Criminal Court, where she oversaw the pursuit and trial of former Yugoslav President Slobodan Milosevic, who died in 2006 before sentencing.

The 65-year-old del Ponte, from the Ticino region, was nominated by Switzerland to serve on the commission.

Del Ponte “brings strong investigative skills and an ability to better systematise and use the huge amount of information that the commission of inquiry is putting together with a view to prosecution one day", European Union Ambassador Mariangela Zappia told the news agency Reuters.

Born in 1947 in Bignasco, canton Ticino.

In 1981 named public prosecutor for the canton of Ticino.

In 1989 narrowly escaped a bomb attack.

In 1999 succeeded Louise Arbour as chief prosecutor of the international criminal tribunals for Rwanda and the ex-Yugoslavia. Stepped down in 2007.

In a speech before the United Nations General Assembly in New York, Swiss President Eveline Widmer-Schlumpf has urged swift action against Syrian ... 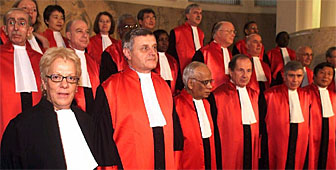 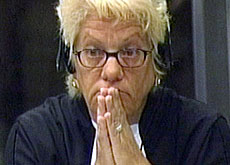 The International Criminal Tribunal for former Yugoslavia is tipped as a favourite for this year's Nobel Peace Prize. The accolade would be a ...

Cartoonist Patrick Chappatte's view of the changing Arab world. Chappatte has wryly summarised events of the Arab Spring since they began hitting ...