The final breakthrough of the Gotthard Base Tunnel on October 15 will be a day of rejoicing for Swiss transport policy and Transport Minister Moritz Leuenberger.

The celebrations will look back on the Gotthard Pass’s great historical and mythical importance to the Swiss, with all its associations with the birth of a nation.

“The Gotthard’s popularity comes in waves. International traffic was phenomenal during the second half of the 13th century, then commercial routes changed and maritime trade developed,” said Jean-Daniel Morerod, a professor of medieval history at Neuchâtel University.

“Oddly, when Switzerland’s birth was written down, two centuries later, people had already forgotten about the Gotthard Pass as a European crossroads,” he told swissinfo.ch.

“It wasn’t until the 20th century that it once again became this essential transit trade axis of merchandise across Europe.”

The Gotthard is a place rich in symbolism. The region was home to the country’s three founding communities – Uri, Schwyz and Unterwalden - who agreed their oath on the Rütli meadow in 1291. It was later the scene of heroic resistance against Austrian occupiers.

It could well be said that the Gotthard, which takes its name from the patron saint of passes, has greater aura about it than the other great Swiss alpine pass – the Simplon.

The mountain was already a source of great fascination to 18th century travellers such as the German authors Goethe and Schiller. For the French writer Lamartine – author like Schiller of a William Tell story - it was a “sight that crushes and terrifies”.

In the collective imagination, the region over time became an emblem of independence and then of cohesion – if not as the crossroads of languages and national cultures.

Morerod has some explanations as to how it gained this mix of reputations. “There was certainly a coincidence between the Gotthard’s commercial importance in the 13th century and the local communities’ rising against the Habsburgs,” he said.

“Uri, which had most likely benefited from the merchandise trade, was given imperial privileges because it controlled the pass. It was the first of the Waldstätten [founding cantons] to receive these privileges.”

The Wäldstätten rebelled after the political situation, which had formally protected them, changed. They swore to help each other should anyone try to subjugate them and it was against this background that the famous Rütli Oath was made.

This mythical dimension to Switzerland’s birth is probably also a manifestation of the region’s mystical traditions, and has spread through, not always reliable, oral retellings.

“There are very few sources because writing had not taken off in the founding cantons at the end of the 13th century,” added the historian, with a laugh.

The White Book of Sarnen, the first chronicle of the fight for freedom of the Gotthard communities, combines the stories of the Rütli Oath (1291) with William Tell (around 1307). The book itself dates from 1470, a good 150 years afterwards.

After this, Tell – of apple-shooting fame – was often represented with the country’s founding fathers. He has even appeared with Nicholas of Flüe, who mediated between the warring confederate parties at Stans… in 1480. Flüe later became the patron saint of Switzerland.

“When people started writing down the myths, Nicholas of Flüe was presented as a sort of moral guarantor, as a call to reduce or avoid violence,” explained Morerod.

Nowadays, central Switzerland is often associated with the notion of the réduit, the Swiss bunker and defence system in the Alps, developed around the time of the Second World War.

“The myth of William Tell prompted Switzerland to accept its destiny but also encouraged it to see itself as a kind of exception,” added Morerod.

This idea of réduit - of resistance - seems to be firmly entrenched in the national psyche. This summer a survey showed that Swiss generally were less open to the outside and to change than ten years ago. The reasons given were globalisation, the 9/11 attacks on New York, the grounding of the national carrier Swissair and the financial crisis.

It’s a trend confirmed by the historian. “It’s true, even if there are some misgivings over whether the myths have really kept alive this idea of living in a closed world inside a federal alliance and not giving power to foreigners,” he commented.

“Something about Switzerland’s present fate seems to have been suggested by the founding myths. This is what everyone’s becoming interested in again at the moment, to the extent that it is being exploited by political parties.”

So William Tell lives on and the new tunnel will “reawaken the need for myths in the population”, according to Marco Solari, the man behind the celebrations for the 700th anniversary of Switzerland in 1991.

Solari has been tasked with launching a project for a National Exhibition which will straddle the cantons of Ticino, Uri, Graubünden and Valais.

The Gottardo 2020, which brings together many aspects of the region, would coincide with and mark the opening of the base tunnel, in December 2017.

1291: this was chosen at the end of the 19th century as the official date of Switzerland’s birth, because it is the date of the Federal Charter, the oldest document to speak of an alliance between the cantons of Uri, Schwyz (which gives its name to the country) and Unterwalden (old name for two present cantons, Obwalden and Nidwalden).

1315: The three original cantons renew their alliance with the Pact of Brunnen, concluded after repelling an Austrian attack at the Battle of Morgarten.

1481: the Stans agreement mediated by Nicolas of Flüe means the number of cantons rises to 13 .

The ideas of the Reformation start several religious wars but after the 30 Years’ War, the Peace of Westphalia recognises Switzerland’s official independence in 1648.

1798: With the arrival of the French troops, a radical upheaval takes place in Switzerland’s political organisation. After the defeat of France by the European monarchies, three new cantons are added to the Swiss Confederation in 1815.

1848: Switzerland becomes a liberal federal state, after the conservative cantons capitulate in the Sonderbund War. Switzerland counts 26 cantons, as it does today.

This is a national exhibition project that should accompany the opening of the Gotthard Base Tunnel (expected in 2017).

The exhibition centres around the mountain peaks of central Switzerland and should be ready for summer 2018. The first project did not conjure up a lot of enthusiasm because the controversial Expo.02, which suffered financial problems, which was still fresh in everyone’s minds.

The idea is now for the project to cover a vast diamond-shaped area from Bellinzona to Lucerne, and from Chur to Brig. The accent is being placed on culture, mobility, energy and nature.


(Translated from French by Isobel Leybold-Johnson)

Tunnelling through a mountain

Constructing an underground tunnel like the Gotthard, which at 57 kilometres long will be the longest worldwide, is a feat of engineering. The ...

The "difficult" life of the Swiss peace saint

Wealthy medieval farmer Nicholas of Flüe shocked his community when he left his family to live as a hermit, but he later became known as the ... 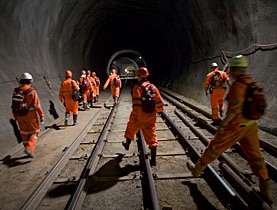 Under the St Gotthard massif, they are beavering away to construct what, at 57 kilometres, will be the world's longest railway tunnel. From 2017, ...

Down in the depths

Working on the 57km-long Gotthard Base Tunnel. The construction is at the heart of the new transalpine rail route - New Rail Link through the Alps.

How the Gotthard tunnel was made. The Gotthard Tunnel is the longest road tunnel in Switzerland and the third-longest in the world at 16.4km.