For hundreds of years, Pennsylvania Dutch and Swiss German have been spoken in America by the descendants of Swiss immigrants. How do these dialects compare with those spoken in Europe today?

You may know that Pennsylvania German, also known as Pennsylvania Dutch (PD), is the primary language of most Amish and conservative Mennonite communities living in the United States today. What you may not know is that most PD speakers are ethnically Swiss.

Before emigrating to the US in the 18th century, many of their ancestors, persecuted in Switzerland for their Anabaptist beliefsexternal link, fled to Germany where they picked up Palatine German – the linguistic ancestor of Pennsylvania Dutch.

Other Anabaptists from Bern and Jura continued to speak Swiss German after emigrating, but since many came to the US via Alsace on the French-German border, their language split into two different Alemannicexternal link dialects: Amish Alsatian German and Amish Swiss German. The Swiss German diverged even further between Amish and Mennonite communities.

It can all get rather confusing – even for the speakers themselves.

“I know a family of Amish living here in Wisconsin where the dad is from Adams County, Indiana – where Amish Swiss German is spoken – while the mother is from Allen County, where Amish Alsatian German is spoken,” Mark Louden, a professor of German and expert in Anabaptist studies at the University of Wisconsin-Madison, tells swissinfo.ch.

“One of their sons married a PD speaker, and now their kids are growing up with Amish Swiss German, PD, and English – plus, they all understand standard German, too!”

The languages are all similar, but far from identical. Louden explains that as the minority language, most Amish Swiss German speakers can understand Pennsylvania Dutch, but the reverse isn’t necessarily true.

It’s a phenomenon that Guido Seiler, a professor of German linguistics at the Ludwig Maximilian University of Munich, is trying to understand in his research on Swiss German-speaking Amish and Mennonite communities in Indiana.

He hypothesises that Pennsylvania Dutch is better understood by Swiss German speakers than vice-versa because PD is more closely related to the dialects that gave rise to written standard German, which all Amish learn in order to read the Bible.

Today, the US state of Indiana has the largest concentration of Swiss German speaking Amish, who came from Switzerland via Alsace in the early 19th century. Many settled in a town in Adams County they dubbed Berne, after the Swiss capital. Today, Berne, INexternal link is still a major centre of Swiss-German culture, complete with a replica of the Swiss city’s Zytglogge clock tower, and a historic Swiss Heritage Village.

So how do these dialects compare with the standard German and Swiss German spoken in Europe today?

Louden says that PD, Amish Swiss German, and Amish Alsatian German differ markedly from their European ancestors – but not in the way you might think.

“There’s a stereotype that these languages are heavily influenced by English. When Swiss or German people hear them, they are struck by the borrowed English words right away, even though the actual number of words drawn from English is modest – I estimate it’s between 10-15%,” he says. He compares this phenomenon to the use of English vocabulary in contemporary European German, which is popularly known as ‘Denglish’ (Deutsch + English).

But a more important – and more subtle – difference than borrowed English vocabulary, Louden argues, is the verbatim translation of expressions from English into PD and the Amish Alemannic dialects.

“Linguistically most interesting – and very funny for German-speaking Swiss – are those borrowings that replicate the English structure using Swiss German words,” he explains.

“For example, a Mennonite speaker asked me: ‘Was isch di erschte Name? U was isch di letschte Name?’ This corresponds word-for-word to ‘What is your first name? And what is your last name?’ But in Swiss German, we would use ‘Vorname’ for someone’s given name and ‘Nachname’ for their family name.”

Louden sums up the effect thus: “I've observed that often, a Swiss or German person will hear Amish Swiss German or PD, and say, ‘I recognise every word, but I have no idea what you’re saying!’”

Moreover, he explainsexternal link that the name ‘Pennsylvania Dutch’ is not actually a mistranslation of ‘Pennsylvania Deutsch’, as is commonly assumed. In fact, the name comes an older British and colonial American use of the word ‘Dutch’ to refer informally to the German language or its speakers.

According to Seiler, linguistically speaking, the mechanisms behind the divergences and convergences seen in the US German dialects are far from unique. But what is special, he says, is the fact that these mechanisms can be seen at work – and not just in history books.

“On a microscopic level, the divergence of Amish Swiss German from the Swiss German spoken in Bern today is just another example of the emergence of a new language, but unlike with ‘big’ languages, we can observe how exactly this process unfolds,” he says.

Both he and Louden are part of an international research networkexternal link, which also includes the University of Lausanne, and aims to better understand the factors behind the maintenance and evolution of these dialects in Swiss descendants living North America today.

Seiler explains that being part of a community, and wishing to identify that community as a separate minority – as the Amish do – are two important factors that have promoted the persistence of these dialects over time.

“The Swiss German-speaking Amish of Indiana are even aware of being a special subgroup of Amish. Not only do they speak a different variety than the other [PD] Amish, but their folk music is distinct. They also have traditional yodeling songsexternal link that are unknown among other Amish,” he says.

But being separate doesn’t mean being stagnant. Louden says that while it’s commonly believed that varieties of European languages brought to other parts of the world through immigration are more conservative or unchanging, this isn’t borne out by the research.

“Just as there is no culture – even Amish culture – that is ‘frozen in time’, there is no such thing as an unchanging language or dialect,” he says.

The integration of English into PD and Swiss German is a testament to this constant ebb and flow. But at the same time, there are some elements of those languages that are archaic compared to the German spoken in Europe today.

“In PD, for example, the words for ‘man’/’men’ and ‘woman’/’women’ are ‘Mannskall/Mannsleit’ and ‘Weibsmensch/Weibsleit’, respectively – and none of those words is used in contemporary standard German,” Louden explains. PD speakers also use some words derived from English that are no longer used today – such as ‘privy’ (outhouse) and ‘buttery’ (pantry).

Both Louden and Seiler dismiss the idea that PD and Alemannic German dialects spoken in the US are ‘dying languages.’ Pennsylvania Dutch is spoken by about 300,000-350,000 Amish and conservative Mennonites today, while Swiss and Alsatian German speakers, most of whom are Amish, number about 14,000 combined.

“There is literally no group of people on the planet that is increasing as rapidly as the Amish – they have an average of seven children per family, and retention rates of their youth are around 90%. Their populations are doubling every 20 years,” Louden says.

There is some disagreement over whether PD and Swiss German should be classified as dialects or languages, but according to Loudenexternal link, there are no formal criteria for defining one against the other. For the speakers themselves it doesn’t really matter anyway, since the PD word for language and dialect is the same: ‘Schprooch’.

But no matter how many speakers a language or dialect has, Seiler argues that all should be treated as having equal value.

“Every language is a very complex cognitive structure, and is fully developed to fulfill its communicative, social, psychological and cognitive functions,” he says.

“It’s unjustified to classify languages spoken by small populations, or languages that don’t exist in written form – which is most of the world's languages! – as less relevant. Linguistic diversity is one of the most astonishing things about human culture.”

Aside from the Amish and Mennonite communities in the United States, there is another Anabaptist group that took root in North America after fleeing persecution in Europe: the Hutterites. These communities have settled mainly in Canada, and can trace their ancestry to northern Italy and Austria. Like the Amish, they dress distinctively and have large families. But rather than PD or Amish Swiss German, they speak Hutterisch – a form of Austrian German.

Louden, who is himself Mennonite, says that today, most PD and Amish Alemannic German speakers in the US see Swiss language as being an integral part of their spirituality, but do not identify particularly strongly with Switzerland as a nation.

“They want to conserve a precious heritage that is fundamentally spiritual, but for which the language is an important symbol and tangible connectionexternal link,” he says.

Some American Anabaptist groups do travel back to Switzerland to visit the regions their ancestors came from – particularly the Emmental.

“When [Amish and Mennonite people] think of Switzerland, they think of the same stereotypes that everyone does – cheese, chocolate, Alps, Heidi, cuckoo clocks,” Louden says. “But they are profoundly aware of why their forefathers left. Their ancestors had a brutal experience at the hands of Swiss governmental and religious authoritiesexternal link, especially in the 17th century.”

Today in the US, Pennsylvania Dutch is spoken by an estimated 300,000-350,000 Amish and conservative Mennonites, in 31 US states – mainly Pennsylvania, Ohio, Indiana, and Wisconsin.

Reliable figures for non-sectarian PD speakers, whose ancestors were affiliated mainly with Lutheran and Reformed churches and who reside almost exclusively in Pennsylvania, are harder to come by, but the figure is believed to be under 40,000.

The people of Zurich crowded along both sides of the Limmat river to follow the drowning of Anabaptist Felix Manz in 1527.

German dialect in the US Pennsylvania Dutch: A language that persisted

It’s not just Amish and Mennonite communities that speak German dialects today in the United States.

Religious persecution, Indian wars, intrigue and bankruptcy – the story of the founding of New Bern could not be more dramatic - or American, as ...

When the Swiss made America

A record number of Swiss joined the huge emigration waves to the United States in the 1880s. This influx would change American attitudes toward ...

By Dale Bechtel in New York 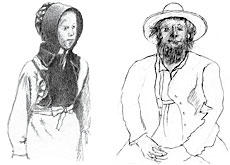 A CD released this year of old Swiss folk songs highlights the debt the Swiss owe North American communities for preserving part of their cultural ... 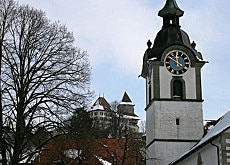 Swiss reach out to Anabaptist communities

State and church authorities have launched a series of commemorative events to reconcile the Swiss with a dark chapter from their past. More than ... 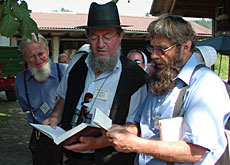 When a group of Amish visit Switzerland, they are as much an attraction as the sites they come to see. swissinfo spent a day on the road with an ...