The father of Sigourney Weaver’s alien has just turned 70, and while H.R. Giger is justifiably famous for his science-fiction monster(s), his art goes far beyond the movie business.

But in his homeland, the artist, who has focused during his career on the fantastic realism and surrealistic genres, has never really benefited from official recognition despite his international success.

Giger’s career in the art world is often synonymous with one word: “Alien”. The monster he created for Ridley Scott’s film earned him an Oscar for special effects in 1980.

His film work is just one facet of his talent though. Giger is also known for his sculptures, paintings and furniture.

His art is not for people with weak nerves. Critic Fritz Billeter once wrote that Giger’s work was “loaded with eroticism tending often towards the shocking and the sadistic” and sometimes taking the form of an “orgiastic cult”.

Not surprisingly, Giger’s own museum in the small medieval city of Gruyères in canton Fribourg is not the most relaxing place to visit. The train model put together with a lengthy series of skulls and a locomotive that looks a lot like the one that pulls the Santa Fe express can seem more than a little alienating to most people.

But his legendary Harkonnen furniture – designed for an unproduced film of Frank Herbert’s Dune novel – do more than attract the eye. Giant chairs made of some creature’s backbone, in some cases crowned by skulls, surround a table with four legs made from alien bones.

A glance in the gallery – adults only – is proof of Giger’s conflict with authority, especially the Catholic church.

The walls are covered with drawings and paintings that mix pleasure and pain. Sexual practices sanctioned by society are presented with texts that illustrate Giger’s struggle against official institutions.

Giger’s so-called biomechanoids represent a large share of his work. His representations of these creatures is a mixture of human and mechanical parts, with a strong focus on sexuality that can be disturbing for the museum visitor.

These biomechanoids are to be seen in many of Giger’s paintings and drawings, but the theme is also common to his sculptures and furniture.

Tobia Bezzola, curator of Zurich’s fine arts museum, appreciates Giger and has worked with him on two exhibitions at the museum in 1995 and 2005. Bezzola particularly enjoys the artist’s acid view of society that occasionally lead him to blasphemous outbursts.

“Giger is for me one of the most important Swiss artists of the second half of the 20th century,” said Bezzola.

He points out the artist’s use of film and other art forms that helped people sharpen their visual perception. He also believes that Giger should be as highly rated as Swiss giants such as the architect Le Corbusier or fellow artist Max Bill.

Giger’s biggest problem is that he has not always been appreciated by Swiss culture specialists. His decision to become involved in popular culture forms such as fantastic films, record covers and so forth led to worldwide recognition, success that may have made him suspect to some.

“In America, there wouldn’t have been a problem,” Bezzola told swissinfo.ch. “New York’s museum of modern art is running a Tim Burton exhibition. His characters are drawn directly from graphic novel genre or horror movies.”

Hans Rudolf Reust, president of the Swiss federal culture commission, only met Giger recently. He saw the artist mainly as a sort of pop icon, who impressed young people in the 1970s and 1980s with his film work and record covers for example.

Despite his Oscar, Giger was never really recognised by official Switzerland, much as he was ignored between 1967 and 1970 when he applied for federal grants.

Reust sees the explanation in Giger’s style. “Fantastic realism and surrealism were never really appreciated in Switzerland,” he said.

Giger remains on the outer for the time being, with none of his works part of an official collection.

“Official Switzerland has totally missed out on Giger’s work, hardly noticing him,” said Reust. “But he deserves respect as singular character who has managed to create his own world.”

He studied architecture and industrial design at Zurich's School of Applied Arts.

He began work as an interior designer in 1966, before becoming a full-time artist and filmmaker in 1968.

In 1978 Giger began work on Ridley Scott's film Alien, sculpting most of the creatures and sets, and earning himself an Oscar two years later.

Giger's album covers for Debbie Harry and the band ELP were voted among the 100 best in music history in a survey of rock journalists.

Throughout his career, Giger also worked in sculpture and, in 1988, created his first total environment, the Tokyo Giger Bar, and in 1992 a second Giger Bar in Chur.

The H.R. Giger Museum, inaugurated in the summer of 1998 in the Château St. Germain, is a four-level building complex in the historic, medieval walled city of Gruyères. It is the permanent home to many of the artist’s most prominent works. 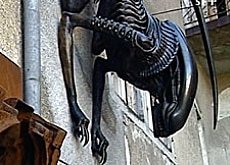 A sculpture of an alien by famous Swiss artist HR Giger has fallen foul of city by-laws in the tourist town of Gruyères. The authorities have ...

In Zurich no one can hear you scream

Cult Swiss artist and designer HR Giger, the visual effects star behind the sci-fi horror film Alien, is holding a retrospective in Switzerland of ...

H.R. Giger and his work

Painter, sculptor, architect and designer H.R. Giger turned 70 on February 5, 2010. The Swiss artist is known worldwide for his biomechanoid ...