The government and cantons have launched their campaign for an amendment to the education system, on which the Swiss public will vote on May 21.

The aim of the reform is to create a unified education system for the whole country across all levels of education, but with minimal federal intervention.

Schools have been the exclusive domain of the 26 cantons until now, with each having its own education law.

Interior Minister Pascal Couchepin said on Thursday that if Switzerland wanted to be at the top of international education tables, harmonisation of the education system was necessary.

He described the proposed constitutional amendment as a "simple but efficient system" that would improve coordination at all levels.

Economics Minister Joseph Deiss said the reform would meet the demands of a more mobile society and promote innovation.

These sentiments were echoed by Hans Ulrich Stöckling, head of the Swiss Conference of Cantonal Ministers of Education.

"We want to be able to set common goals and check whether they have been achieved," Stöckling told swissinfo.

"We also want to make it easier for families who move from one canton to another so their children don't have to adapt to a new system.

"Thirdly, we want to improve cooperation between the cantons themselves and the cantons and the federal authorities in the whole field of education."

The government and cantons will be responsible for implementing most of the changes.

If the cantons cannot agree, the government will be able to lay down the law, but only in issues such as the age when children start school, the length of schooling, educational targets and recognition of diplomas.

"The government should do as little as possible but as much as necessary," said Couchepin.

Stöckling, who is confident voters will accept the reform in May, said previous attempts to harmonise the system were too ambitious – "they wanted to harmonise everything and that is not possible in a multicultural country".

"A country with four languages and different cultures within a language group needs an education system which reflects this. It only now that we have found a solution which suits the demands of the different cultural groups in this country," he added.

At the beginning of 2005 an online survey found that almost 90 per cent of the 13,000 respondents wanted to see compulsory schooling harmonised across all 26 cantons.

A sizeable chunk - 59 per cent - felt that children should start to learn to read and write in kindergarten and not wait until they started going to school.

In a survey for a Swiss news magazine Facts this week, 52 per cent of Swiss said they wanted their children to start learning a foreign language in kindergarten or the first school year.

The German Swiss wanted English to be taught as the first foreign language, the French Swiss preferred German.

Schools have been the exclusive domain of the cantons until now. Each of the 26 cantons has its own education law.

All previous attempts to unify or harmonise these educations systems have met resistance from the cantons.

Any coordination has been carried out until now by the Swiss Conference of Cantonal Ministers of Education.

On May 21 the Swiss public will vote on the amendment. 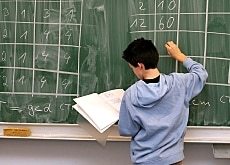 The cantons will no longer have the final say on education after the Senate adopted a constitutional article to harmonise Switzerland's school ... 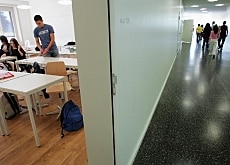 Moves are afoot to harmonise education in Switzerland without undermining the authority of the cantons, which each have their own system. ... 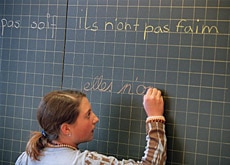 Schools in Bern to put French before English

The cantonal parliament of Bern - where the majority speak German – has voted in favour of French over English as the first foreign language at ...